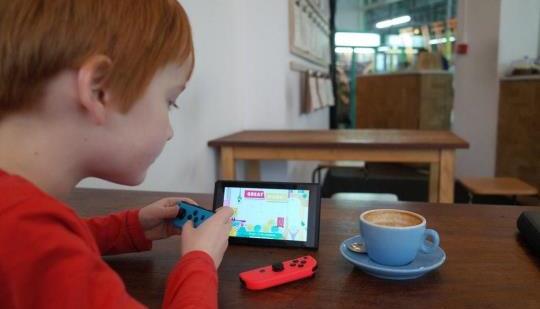 Are Sony and Microsoft handing Nintendo a competitive edge by not meeting the needs of parent gamers with smaller controller options?

Adhttps://store.steampowered.com/app/1488200/Symphony_of_War_The_Nephilim_Saga/?utm_source=n4g&utm_medium=native&utm_campaign=sow_n4g_native&utm_content=png
- Comments (108)+ Comments (108)
TopNewestOldest
Expand all
The story is too old to be commented.

OG Xbox needed smaller controllers than the Duke, otherwise controller sizes are just fine. My son has been playing Xbox since hes was four without any problems. Leave the micro controllers to the 3rd parties instead.

This is this first time that I have ever heard anyone say that controllers are to big and they need to be smaller.
Infact didn't Sony make the ps4 controller big then the ps3 controller because that is what consumers where asking for?

This is the first time you have heard someone say this? I heard it way back when the ORIGINAL Xbox came out the ORIGINAL It was constantly articles from JAPAN saying this. I think only blind fan boyism will make you ignore the simple logic of your fingers are 1 to 4 times longer than other child or adult.

STOP BEING IRRATIONAL people there is not problem with being able to buy a smaller Sony or Microsoft controller. Nintendo has the PRO controller for the adults and the pack in controller that smaller hands can use.

No they don't you need bigger hands.

Yep lol, I love the Xbox one s controller best ever imo, I hear Playstation gamers say they love the PS4 controller.

Both XBO and PS4 controllers are perfect

Its funny because i remember when everyone was complaining how the Dualshock 3 controller is too small. Then Sony comes out with the Dualshock 4 and solves this complaint but not we need small controllers again.... LMAO
My best friends 5 year old has been playing game with us since he was 3 and he never had troubles reaching either controller buttons on my friends XB1 or my PS4. Either way, I'm sure there are plenty of 3rd party controllers that are smaller in design for this exact issue.

Yeah the Dualshock 4 and the XB1 are perfect in basically every way. Going from one to the other doesn't even throw me off like it did going from a 360 pad to a Dualshock 3.

@showtimefolks the article never said anything about changing Sonys or Microsofts standard controllers. They are asking for a OPTION to buy smaller ones. It will not affect you.

It really is. The author of this article must not have played videogames as a kid. These controllers are just fine, and judging by the average age of a COD gamer, they are more than adequate.

Do you even remeber the size of SNES controller?

the article never said anything about changing Sonys or Microsofts standard controllers. They are asking for a OPTION to buy smaller ones. It will not affect you.

With no kids in the picture - I have the exact opposite view. I think Nintendo needs more options for larger controllers. From the Wii U and now the Switch, long play sessions are annoying because the controllers feel too small for me. (button/stick placement)

Ironically, the kid in the picture has hands that are almost too big for the Switch controller already.

You sound like a uninformed repeater of LIES. The Wii U and the SWITCH have a PRO CONTROLLER called the PRO CONTROLLER. They are full sized hard core controllers and both systems have always had them.

I have BOTH OF THEM AND THEY FEEL GREAT!
http://www.bestbuy.com/site...

Meh - prefer not to buy a new controller just to play a system comfortably. Not to mention you then lose all benefit of having the wiiu screened controller. Also for the switch - using it in store - the main benefit is the mobility imo, and that goes out the door if you have to use a new controller.

Stop complaining about the size.

Is that what you told your girlfriend? Jk

Also, larger ones plz. My ps4 controller is okay, but could be more comfortable if it was a tad larger, noticable with longer gaming sessions.

Do you by chance weigh 400 pounds?

do you by chance realize that some people have bigger hands. heck look at trump he CLEARLY has the greatest and biggest hands in all of history. yet he doesn't weigh upwards of 1000 lbs.

body weight and hand size have next to no correlation

Trump is a fatass what are you talking about

Nope, I have a BMI around 20 which means healthy sized human. Just taller than the average human. I can hold a sixpack beer or carry two flasks of soda in one hand.

My 5 year old does just fine with the ds4

I'm a size queen. Bigger the better. I think the ds4 and Xbox one controllers are perfect. I haven't tried a switch controller, but they look kind of small. I always thought that the Wii controllers were a bit small for my liking.

Did you like the Duke? Some of my friends were Duke diehards... I went with the S and never looked back.

The Duke was a little bulky, but if it were cordless it would have been fine. I did prefer their button layout changes they made later. Controllers were like cell phones. Started big, got smaller and now back to big...

Lol I haven't heard that name in such a long time. 😂😂😂

I liked that name better than the Hamburger, lol!

The S was great. The Duke was basically a weapon with colorful buttons.

If you ask me, Duke was Microsoft's only bad controller. The S, X360, and X1 controller(s) are grand.

The xbox and ps4 controllers are properly sized for average to large size adult hands. Children do fine with them also. The Switch's controllers, by comparison, are tiny for normal adult hands and can lead to cramping, while they are better suited for a childs small fingers.

Take a look at this survey, bearing in mind no survey is perfect.... http://www.polygon.com/2016... So the average gamer is mid 30's for men and mid 40's for women, according to this survey. Even if these numbers aren't quite precise, they paint a fairly accurate picture of who's playing the most games/consoles....why make controllers smaller when the majority of the market would not benefit, but actually be harmed by smaller controllers?

Forget about smaller controllers. Methinks the author might need a bigger brain.

We can all see what success breeds. Smh. Now some are saying the others should follow Nintendo with smaller pads. Nintendo do you. Sony/ms do you.

Haha good one Russell Westbrook, "Dont do they, Do you."

PlayStation sure as hell doesn't need a smaller controller.

interesting. What does everyone think is the right age for kids to start gaming? I know mine will be introduced to nintendo before anything. Switch is the first ninty machine ive owned since a 2nd hand game cube I bought to play Ikaruga on. Great machine.

It's nearly perfect as it is. I wouldn't suggest they change it. However, I don't see them having no reason to implement a mini-brand, if it's highly requested (otherwise it's pointless / no profit).

Fuck off they are both fine the way they are

I don't know about whoever wrote this piece. But I don't see how Sony and Microsoft need smaller controllers when people already complain about modern controllers being too small. So what would make anyone think the solution would be "to make them smaller"? That's insane.

Nintendo wants to have these toddler sized controls, if that works for them, great. But no, the playstation and/ xbox DO NOT need to follow that toy sized route.

Smaller?? No, my main reason for gaming on XB is the size and comfort of the controller.

Note to this article writer:
Get the hell out of gaming!, smaller controllers ? da hell is he thinking?. :/

i think you need bigger hands.

Stupid article...... The Xbox Controller is known to be the best controller available and is why it has had virtually no changes since the Xbox Controller S was introduced back with the original Xbox. Even most Sony fanboys admit that the Xbox controller is marginally better and they have a pretty decent controller of their own to be proud off.
The saying goes..... if it ain't broke, don't fix it.... and clearly Xbox and Sony are following that saying, while Nintendo are the ones playing catch up by constantly re-inventing their controller every generation. They have a small and quirky controller this time, that some people enjoy, and yet nobody is claiming it is the best except this "made for views" article.

Xbox and Playstation games consoles aren't for children. That's what Nintendo is for. /S

Seriously though, the author could maybe look into third party controllers?

To accommodate smaller kids I agree, but it's not like Nintendo has 2 good controller options for both children and adults. Lord knows the joycons are not great options as controllers, and the Pro controller is too big for my sons hands who's 6 years old.

DS4 is the best controller made. Im really curious if they can raise the bar even higher with ps5 controller.

This helps make it so we have less annoying kids screaming over mic in online competitive games or telling us how they banged our mom. We're good with making it so there's less children playing on them, they can grow up and get bigger hands.

That's not the point of the joycons. And consoles should have controllers that make sense for their consoles and games.

The sizes are fine. The ds4 needs a better battery and the x1 controller needs stronger springs in the thumb sticks.

No love for the Duke?

Both PS4 and XBO controllers are just fine in size imo. They're both pretty different in shape and size but I find both comfortable to use.

/facepalm
Unless you have extremely small hands then no, we don't need micro controllers.

Trump is that you?
Kidding!
On a more serious note though, NO! just NO.
Go aftermarket for your customised crap like everyone else has to when we want things changed on our controllers.

It seems that the problem here is his kids. He wants to play ps4 or xbox games but he can't cause his kids or maybe his wife won't let him play. The way i see it. He has 2 options

1.Get a divorce so he can play in peace all he wants
2. Just endure a couple of years until his kids grow.

Hell he's better just teaching those kids valuable stuff like science, math, maybe a sport or how to exercise properly until they're big enough to play.

Or go the third option and buy a 3rd party controller suitable for his kid's hand size. I have a 3-1/2 year old cousin who has no problem using the DS4. Lacks the motor control and spatial awareness to connect button presses to what's going on on screen, but sure loves watching Rayman fall off that ledge over and over again. She does have fun with the move controller though, and always wants to use the wonderbooks.