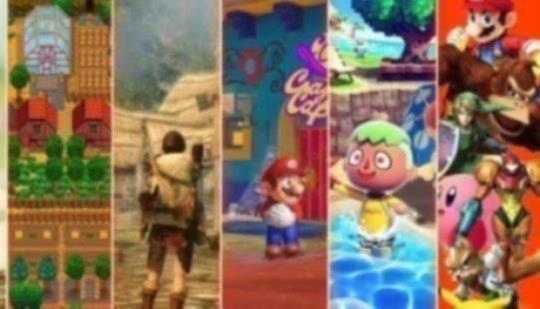 Nintendo E3 Predictions - This is what Nintendo Needs to Show

E3 is the annual video games convention in Santa Monica, California. For the first time the event will be open to the public. E3 is the second Christmas for every gamer in the world, with dozens of new announcements, gameplay footage and in-depth information about everyones favorite video games. Reggie, president of Nintendo North America has promised “we’re gonna have a big E3 this year”. The company will occupy an equal amount of space compared to Sony and Microsoft at the convention center in Los Angeles this year for the first time.

Fifa and Skyrim would be amazing from 3rd party side.

I hope EA keeps it's promise of making Fifa a dedicated game and not a poorly executed port.

And just to dream a bit, once it looks like its done, fade to black..and boom, new Metroid game from Retro

If they show 70% of that (most of which we already know are coming), plus a couple of new surprises, it will be a pretty amazing E3

Great list, we can only hope for. I believe an Animal Crossing would make a pretty big splash, fans have been waiting for years. There hasn't been much in years ( minus the welcome amiibo update, and spin offs ).

A metroid game would be terrific, but not sure if Nintendo would do this at the E3 and not in a separate event?

For 3rd party support, I am almost convinced we will see Story of Seasons and Stardew Valley running on the Switch.

I think Animal Crossing might be saved for next holiday season. Next Level Games and Retro Studios have been long been working on projects, so maybe we'll hear something about one or two of those.

All in all not a bad lineup.

It's a pretty neat list, however, too many " big " games - Pokemon, Mario, Pikmin in one conference could become an issue. Like Apple would never introduce a new iPhone, new macBook and it's self driving car in one event.

Theres also the Animal Crossing Smartphone app that was announced over a year ago and has since then never seen the light again, only for it to be delayed twice.

Pikmin 4 is proabbly sure to be shown at E3.

that analogy doesn't work. even if apple wouldn't showcase phone, Macbook, iCar, etc., it's for totally different reasons. those are all different types of standalone items that has their own market.

Nintendo's whole plan is to sell their console so people would buy software. the best way to get someone to buy the switch is to announce as many games as possible, so people can see the support and eventual game production. if they have REAL GAMES COMING OUT FOR CERTAIN (no scalebound crap to fish people and not release), it's in their best interest to announce those games ASAP.

I dunno though, Mario is a shoe-in for being there, the Pokemon rumors and hints are too convincing to ignore, and Pikmin 4 was already nearing completion a while ago. Titles such as Xenoblade, Zelda DLC and Fire Emblem Warriors are all coming this year. I can see them keeping quiet on Fire Emblem Switch and the Zelda DLC for the time being. Pokemon may not be coming this year, so maybe they'll hold that close to their chest, but it'd be weird considering how (even if it doesn't release until next spring or summer) the mere announcement would send Switch sales through the roof and make it an incredible hot seller during the holidays. Announcing Pokemon would really give confidence to their investors, too.

As Otaku has pointed out, Xenoblade 2 is a first party title.

Skyrim has not been confirmed to be the Special Edition.

Makes zero mention of being the Special Edition. Mind you, it is Bethesda that words those descriptions, features etc.

"Winner of more than 200 Game of the Year Awards, The Elder Scrolls V: Skyrim reimagines and revolutionizes the open-world fantasy epic"

Nothing about Special Edition.

"Winner of more than 200 Game of the Year Awards, Skyrim Special Edition brings"

"Winner of more than 200 Game of the Year Awards, Skyrim Special Edition brings"

They removed those terms and title for a reason. It has something to do with Skyrim simply being a port of Skyrim as suppose to a remaster, special edition etc.

I just don't know where you've received this information from. Some of what you posted are not "CONFIRMED GAMES".

Now is the time!

I only want Animal Crossing and a Paper Mario, a Metroid Prime would be sweet though.

MorpheusX: "Yes , I have an emergency to report?,,There's a Black Man running around N4g.com in a White man Bodies, Like in "GET OUT" the Movie

Operator: OMG!!! What's his location, he's gonna need emergency surgery to transfer his black brain back into his body.

Metroid please, it's my only desire!

If they had a 2 hour long conference booked and just walked out and coughed *metroid* and then left I'd strongly consider that as winning e3.

lol! so true, any step up from last year would also be a win, and that by no means is a challenge. Zelda is an amazing game, one of the best, but focusing the entire e3 around one game. not again - please.

Nintendo hasnt won an e3 since forever unless you count last years showing of one game something to write home about. They need Metroid wether it be a 3d or 2d sidescrolling game. They need third partys that are announced to come out this year and they need other hard hitting rpgs to bring in other gamers than nintendo die hards.

Oh and they need the virtual console with over 100 games on launch with at least 10 added every month. Wouldnt hurt if their online service let you play all these games... Ohh and to top it off snes classic announcement for fall 2017.

virtual console took about 4 months to come to wii u hopefully, we will hear about it soon.

On the online service side, i guess we have to wait until fall to see how the mobile app integrates with the switch

Metroid for sure. I'd also love to see more Fire Emblem and SMT.

I'm looking forward to Xenoblade 2. Bayonetta & B2 port would be nice. Metroid 4 and Pikmin 4 I'd hope would come but bring on the third party games like Skyrim 5.