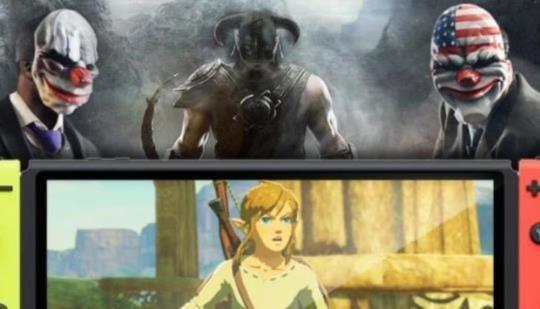 The Burden of Lackluster 3rd Party Games on Nintendo Switch

The Nintendo 3DS sold more than 65 Million Units, with no 3rd Party developed game in the top 10 of it’s best selling video games. Gamers are concerned about the lack of 3rd party games on the Nintendo Switch. Though Skyrim, Payday 2 and Fifa 18 are some major games not developed by Nintendo coming to the hybrid console. Do these games really benefit the console? Or will it make the Switch look weak and underpowered when compared to the Playstation4, Xbox One and PC version of the game?

I agree, I am getting tired and worried about all these 3rd party games flooding the eShop, currently it looks like the android google play store with a lot of games that clearly shouldn't be there.

Best example on the Switch is that game you fly around on a motor cycle - Vroom in the night sky. What the heck?

Not a good article, it is common sense to know if Nintendo sell as much consoles as the others, Nintendo games will always outsell others, for example Mario kart Wii before it was bundle sold 32 million with 100 million system sold.......grand theft auto sold 32 million with 160 million system sold Xbox and ps3, so what make him think a 3rd party will sell more than a Nintendo game which get higher ratings compared to other games

Despite Nintendo games always selling well, the 3rd party on handheld line always made money......because with the 3ds or DS, it did not cost millions to make a game like ps4, so any game made for the 3ds or DS made profit with a short amount of sales, so even if 3rd party did not compete with Nintendo, they made a lot more money than they would make selling a game on PS4 or Xbox One......this is why dragon quest series basically belong to Nintendo now.....you can buy dragon quest 1 to 11 if you have a 3ds

Japan knows this so they do not mind selling less than Nintendo because they still make more money than on other systems.......nintendo handheld had games or spinoffs from every top 3rd party games, persona Q, grand theft, etc, most of the time developers out their game there to fund a ps4 game. It's mostly western developers who have a pride issue with their games selling less than 1st party games. This is why they love Sony and Microsoft system in the top 10 of Sony best sellers it have 3rd party taking the top spot with Sony taking the spots at the end or may not be on the list.

The switch since it is also a handheld will get games, will those 3rd party games sell better than Nintendo I highly doubt it but if the developers are fine with 3ds sales they will be all over switch.

You are missing the point, yes 3rd party games can sell well. But a lackluster port like Lego City undercover that ran really well on PS4 ran like a .. potato .. on the Switch, dropping well below 20 FPS. This is the kinda port that can hurt the Switches reputation, making it look weaker than it is.

The article does not say that 3rd party support is not needed, although Nintendo can do without, and has proven so in the past. What it needs is good 3rd party support, developers who port the game, or tailor the game for the console, and execute it well. And not just someone who throws some games on the Switch because its now easy to do with Unity. To make a descent port it takes more than just getting it to run, it needs to feel native to the console to really make a splash, and right now we have seen some poor ports already, one of them being the game mentioned above

lackluster? more like Japanese Developers are making sure they decide on the correct release dates instead of just rushing it out and leave a large droughts.

There are many lackluster 3rd party games that aren't Japanese, Lego city undercover being one of them. Its a shame that a game like this can drop below 20 frames on the Switch. Snake Pass was a descent port comparing well with the PS4 version, theres no reason Lego City Undercover shouldnt have been able to accomplish the same. It ended up making the Switch a lot weaker than it is.

I sure have, but I also played it myself on the PS4 as well as on the Switch, and the stuttering, and extreme drop in frame rate happens a lot more often on the Switch. Dont get me wrong I love the Switch, I would even go as far as saying its my favorite console, but Lego City Undercover was unacceptable as $60 game on the Switch. While it is a great game, the performance issue really do bother me, and that has rarely ever been the case with any game before.

The Case for a Sonic Mania Sequel