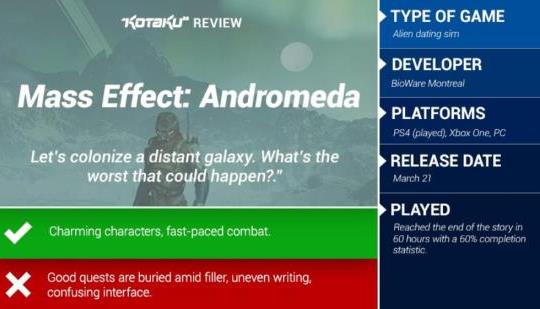 Let's colonise a distant galaxy. What's the worst that could happen?

First time i can say kotaku is not typical, i thought they were going to be biased like usual, omg jrpg 10/10, ew another type thats not jap!
But i stand corrected

After having played this game for about 20 hours after I started over from the trial I have done the first planets main story and set up the first colony and all I have to say is this game is actually really good. The scope of the game is so big there really hasn't been a game with such a big scope I feel. And while the planet exploration does feel a bit Like DA:I there are still set piece "dungeons". The first main "dungeon" was huge and the art was fantastic and some of the scenes were unexpected and really well done.

The story is really well done and engaging. And the companions and new main story characters are much better than I expected. I really like they if you have certain characters in your party even NPC's may have different things to say or or may not say things if a companion is with you, it's cool how they interact with your companions. This is really neat and something that they never did before that really adds depth to the companions. Starting a new colony was actually a great way to create a new beginning for the series.

I think as far as glitched animations go which aren't even that bad and probably won't even happen in your play through people need to understand that this is by far the biggest Mass Effect game to date. Things like mo-cap simply aren't reasonable expectations for a game on a scale this big.

It's really unfortunate that this game is getting bad reviews over things that are so inconsequential to the the actual game. I'm starting to get the feeling a lot of the reviewers wrote their reviews before they got far enough into the game to see what it actually has to offer.

It's sad that people I guess aren't buying this game it only hurts the series and means if there is another Mass Effect game they will scale it back. We're the losers if that happens, the gamers will get less of a game in the end. People are really missing out on what is defiantly the biggest Mass Effect and may well end up actually being the best.

I really recommend people over look what are really minor shortcomings and realize how much is really good with the game and how HUGE this game is.

You can read my prior comments which were critical of this game but please note I was always careful to point out I hadn't really played that much of it and that none of my opinions were meant to be final. Which is the same with this one, I have not yet finished the game.

I have played about 15 hours+ give or take and I agree overall with this. It is a good game with lot of content, but I feel I am hammered with so many side quests that as someone who is OCD, it feels so overwhelming to work on. I really wish all missions were broken up by planet then by priority or side quest. I am not arguing about a lot of sidequests, just so many are thrown at you all the time it's so hard to keep up and keep the balance between side missions and priority missions. The two biggest issues with this are; 1) Doing a sidequest only to get to "progress on hold" after several steps and 2), have part of the sidequest make you go to a new planet that is linked to a priority mission and going there will just add so many more side quests that trying to shrink down your list backfires.

They didn't give a score

They don't really give scores.
Btw they also have a more positive review. They often do that to please different opinions I guess?