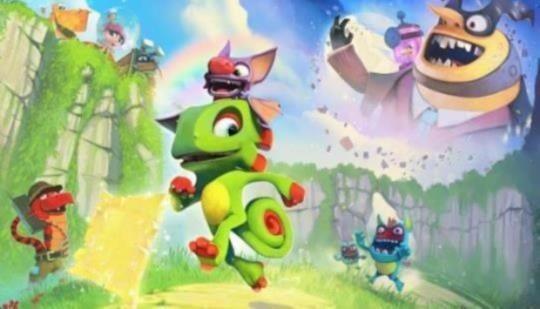 A great myth did the rounds in the gaming industry in the early 2000s: gamers were told nobody wanted 3D platformers anymore.

It was easier for companies to force this narrative on gamers than admit the inconvenient truth: that they simply weren’t up to the job of making entertaining 3D platformers. And they couldn’t be bothered trying.

There's always demand for a major genre during any given time frame. Late 90s into the mid 2000s, 3D platformers were pretty big. Crash, Jak & Daxter, Spyro, Mario, Donkey Kong, Banjo Kazooie, just about every licensed movie game to be made ever, and so many more lesser known titles embraced the trend. In the end though, it isn't so much that interest waned in that genre, but it increased drastically last gen in the FPS genre in particular. We got shooters, shooters, and more shooters that dominated annual release discussion and dominated the online communities, both first and third person cover. The Western RPG began to flourish as well, and the Japanese RPG gained attention as game design continued to transform in a newly discovered realm of HD development leading to the critically acclaimed Souls series.

The gaming landscape transformed, and straight, no frills platforming titles started to seem less enticing. They stopped being made because the demand wasn't really there. At this point though, gaming is experiencing a bit of renaissance. What was old is new again. Sony is reviving classic titles by the handful, and everyone is loving it. 3D platformers are coming back to prominence, and gamers couldn't be happier. Gaming may be hitting one of the best balances it has had in a long while now.

Yeah I think starting with The Witcher 3 and Bloodborne and the insane start of this year for games, it's like we're in a new golden age of gaming.

CNN? You, sir, must be stroking it all night long while being glued to Fux News...

Nope...All mainstream media is propaganda. You there, must be a sheeple if you trust CNN...

article is as stupid as it gets

in order for you to understand why something isn't being made you have to actually understand economics, you could not trick a community of people into believing something is not successful or not wanted , it is simply based on the numbers and in order for there to actually be strong sales of 3D Platformers there actually has to be a real demand.

In fact if such a demand actually existed you would actually see the Platformers that I've released selling absolutely unrealistic sales numbers because of the high demand ie titles like Ratchet and Clank should be seeing ridiculous millions of units being sold because they are basically one of the few Platformers that would release to a market begging for the concept.

This is what happens when you have an open market that is in demand of a concept they are not getting.

When LittleBigPlanet in Minecraft released those games went on to sell millions of units simply because the concept of creating content that other gamers are able to share and play was in demand, this is why you saw other titles like Terraria and even Mario maker made was because there was a demand.

So what this idiotic article is basically saying is that Millions upon millions of people want something that they're actively not buying? 😂😂😂 28514;😂

You cannot manipulate a market through news like that bud, if the community wants something they're going to buy it and the numbers will show the demand.

All genres in all mediums have their highs and lows.

What is The Definitive Version of 'Banjo-Kazooie'?

Void Bastards and Yooka-Laylee are free at Epic Games Store

New Games with Gold for August 2021