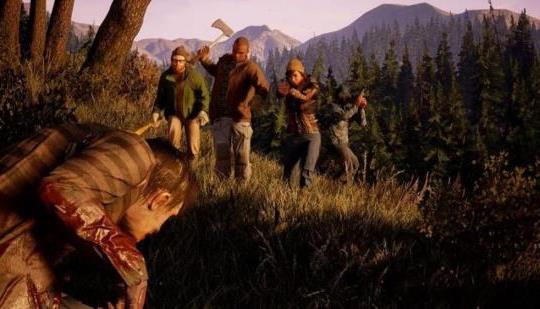 5 Xbox One Exclusives To Look Our For This Year

IM PLAYIN discuss 5 Xbox One exclusives to keep an eye out for this year.

Keeping an eye out for something is always a good thing. You never know when it might sneak up on you and either disappoint or entertain.
Hopefully Xboners can get some of the latter from this years exclusives and not a majority of disappointments like 2016s lineup (forza and gears saving the day of course).

Xboners really, what are you 12.

Xbox One exclusives for 2017 are quite poor compared to other consoles. Microsoft needs to work much harder.

Nice that you got to play them before anyone else. Wish I were you.

He is also the only person that knows the lineup, maybe he is god?

Well they are certainly failing to impress for the first half of 2017.

It goes without saying he means announced exclusives and the poor comment is in relation to the number of announced. Stop being tryhards and translating his words to mean something else because everyone who is aware knows that PS exclusives far outnumber Xbox's this year, going by what is officially announced

Let's be honest, Xbox hasn't had a good non-racing "exclusive" for a long time.

Well not really exclusives are they?

More might be introduced at E3.
Forza 7 is very likely.
And let's not forget that Forza Horizon 3 and Dead Rising 4 were revealed at last years E3 and both were released before the end of the year.
And Crackdown 3, Sea Of Thieves and State of Decay 2 will be excellent, hopefully.

I love my Xbox, but yes, these games are lackluster.

They forgot Cuphead, Crackdown 3, Sea of Thieves & Forza 7. Phil will be announcing 7 more games at the E3.

I'm most looking forward to Cities Skylines which is hopefully releasing this spring.

And Path of Exile

Theres been more than that on a certain other console in just 2 months.

only State of decay 2

There is also probably going to be forza motorsport 7, crackdown 3, cuphead,and they might even announce games this year at e3.

After listening the the last Podcast unlocked with phil, not everything is announced.

#1. You really can't trust Microsoft when they say anything. They can be just saying it as an excuse for no games.
#2. I don't understand what they think they are gaining by not announcing stuff ahead of time? Why would someone buy a console if they don't know what games to expect over the next 2-3 years? Especially from Microsoft who has no proven track record of having a lot of exclusives.

Just listen to the podcast already. Phil tells you why. Just look at Crackdown 3, Scalebound and Quantum Break. All those games were announced too early.

Look our for? At least proof read your own headlines.

Anyway on topic - haven't heard of all of these, few look/sound interesting.

This is sad, isn't even funny anymore.

"5 Xbox One Exclusives To Look Our For This Year"

from the same article

If they're any good I'll pick them up on PC.

At least we have more to play then just Horizon. I`ll take Netflix,Halo,Gears,Forza anyday.

Whatever you say buddy

That is not even true. What are you talking about? Hahaha

So I ask you..what are you even talking about? Your statement is not only factually false, but it's also delusional.

"At least we have more to play than just horizon"

Wow that's such a fat lie. The ps4 has more games this year than the Xbox one has no matter how you far you Microsoft fanboys try to spin it

Not only Horizon is better than halo gears or forza, it's a fresh new ip and just highlights how far behind Microsoft is in first party games compared to Sony.

Over and above that, the ps4 has another incredibly good ip in Nioh. Yakuza zero is another game i'd take over halo, gears or forza. Persona 5 is going to be immense and that's coming April.

Halo gears forza is the reason xbone is practically irrelevant any more.

Unbelievable how people interpret your comment. Reading comprehension must escape these fellas.

Your comment was a response to shadow knights who failed at making his comment seem smart and instead actually made a list where Xbox gets more games.

Thank you, the only one who got it right.

You do realize none of those Xbox games you put there are announced to be releasing this year.

You really are a troll. Had my doubts but not anymore.

I have no problms with any of these games. Hopefully Microsoft can add Battletoads, MechAssault 3, Links 2017, Conker sequel, Crimson Skies 2 and maybe some sports games and SP RPG's.

@Dragonscale
So would Uncharted 4, God of War, GT Sport, Ratch & Clank make the PS4 irrelevant as well? Your statement is just dumb. Having games on a game console would never make it irrelevant. Having almost no 3rd or 2rd party support on a game console could make it unwanted though.

I have high hopes for state of decay 2. The first one was pretty good

Just give me State of Decay 2 and I'll be really happy.

5 X-box one console excleusives to lookout for this year. Actual title.

Why do you even post in a Xbox article. O wait i know. you like to troll

OR I really wanted Scalebound.

Sea of thieves: pirate social simulator... Meh;
Ashen: more like asheet;
Below and wulverblade: nice indie games, like a lot on ps4 already;
State of decay 2: pretty meh, on ps4 there will be zombieish-themed games far more appealing (days gone alone obliterate it);
and also, not in the list:
halo wars 2: very ugly game;
crackdown 3: you can destroy everything and stop. i hope it's not like that;
cuphead: the only amazing superb game on xone (and laptops) for this year.
i hope to see something interesting at E3, otherwise goodbye microsoft, you don't reach my number of minimum must-have exclusives that a console need to have to be purchased (10) because, for now, you're at 6

Hmm. Good for you. If you don't like all of those then don't bother with them.

People won't ever be happy with Xbox exclusives for any year.

As Phil said. If you release gears, halo, Forza everyone is like more of the same.
If you don't release them then it's wow that's lackluster.

Doesn't make any sense. I'm interested in state of decay and crackdown. Let see how those turn out. Then there's cup head and below.

It's really not very different from the Playstation list of titles I'm interested in... Well Practically all of them have already released.

Nier, horizon and nioh.
Persona too but that technically already released in Japan. After these what else do I have to look forward too? What other title?
Detroit, God of War and maybe helllblade... No real release dates for these. And yes I'm aware that the Xbox games don't have release dates either but it's very expected that they release this year... If not then MS will have 0 games and I doubt they want that.

Then of course some of these games come out on pc... So i Could play most of these on pc. The only ones I can't are Detroit, horizon, nioh (for now), God of War... And of these horizon and nioh have released and the others are a question mark.

To me it's not really mind shattering the difference. While I can play all the Xbox games on pc there is only 2 so far, that I'm interested in, that I need a Playstation for.

Is nioh boring anyone else? After getting the hang of it, it starts being kinda too easy. I'm a sucker for difficulty.

Agree 0Disagree 0
▼✖-+
SPAMInappropriate
Show all comments (57)
The story is too old to be commented.
70°