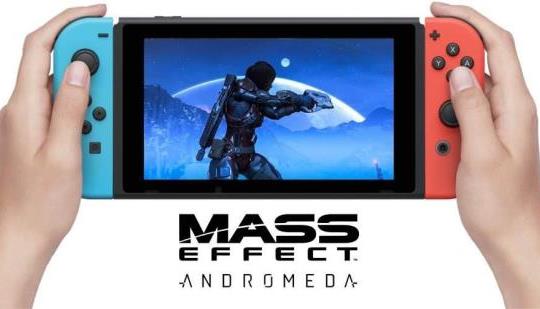 BioWare has revealed that the Nintendo Switch remains a console of interest and that a good launch could see a port of Mass Effect Andromeda to the system.

Adhttps://store.steampowered.com/app/1488200/Symphony_of_War_The_Nephilim_Saga/?utm_source=n4g&utm_medium=native&utm_campaign=sow_n4g_native&utm_content=png
- Comments (46)+ Comments (46)
TopNewestOldest
Expand all
The story is too old to be commented.
2163d ago

It's interesting to know that they think it could run on the Switch. But the DLC alone will probably fill your 32GB of storage.

physical games don't install
and have you ever heard of external storage. Micro SD Card support for Switch

DLC is not physical

@SlappingOysters
"have you ever heard of external storage. Micro SD Card support for Switch"
Do you not read?

By the time it releases switch should support external hdd. For portable mode you just transfer from hdd to micro sd.

You're saying that like you haven't seen articles/news/advertising/conf irmation by Nintendo that the switch supports sdxc cards.... good job dude you're the ignorant part of the Internet.

That's what my $40 128GB Samsung Evo SD card comes in. In any case, it should be no issue considering that SD cards keep dropping in price. By the time this game comes out for Switch, IF it comes out, the SD card prices may have dropped even more.

That would be nice, though it'd be easier to have said good launch if third parties would give consumers a reason to come to Switch, I.E., their games, instead of waiting for consumers before bringing said games at all.

Totally agree. Just Dance and Skylanders as the only real third party AAA for launch and they are ancient games. Thirds not backing in the Switch at all.

There are some that are, but they're the Japanese devs with great RPG's mostly, and indies.
It's mostly the minority of AAA Western devs that aren't pulling much weight on the Switch.

That's the problem dude, it's a paradox with this. Deba will only support the console with games if the people buy the consolé and it proves popular. People don't want to buy the console because they want 3rd party games but devs don't support with their games because people don't support the console. Lol it's a cycle, hopefully and by the looks of it, this cycle will be broken because people seem more interested, and because of the easier porting that devs have been mentioning, we will have games (even if not AAAs at the start) to play from 3rd parties which will prompt people to buy it. Plus the added feature that it's portable and it has Nintendo classic adds to that. So hopefully we will see a change, I'm optimistic.

Pretty much anything the xb1 can run so can the Switch. If the games have to be scaled down a bit to work as a portable game then that's not really surprising.

Too bad EA already said that FIFA is the only game that they're looking to put on Switch in the near future.

That wasnt actually what they said.

We’re supporting the platform,” Patrick Soderlund, executive vice president of EA, said, via IGN. “We are not announcing anything (else) yet, but you can expect us to be there once the platform launches and takes off.”

sd11 is actually correct they said so far FIFA is the only game announced and they can't confirm any other titles. They did mention they are supporting it and will further support it with AAAs if they switch does well on release and the most after. So it all comes down to people supporting the console, which seems to be decent. People still come in to gamestop asking about it, for pre orders, if we'll have extras which Gamestop has confirmed that they will.

Why would you bother? The follow-up to Andromeda certainly wouldn't be on Switch, as it would be comically under powered to be able to handle anything resembling it to any degree of parity.

So the follow on wont be on xbox one either then?

You say that like if andromeda is being released today and the follow up tomorrow. News flash there's a thing called console generations. I'm. It confirming that the follow up will be either this gen or next gen but I do know that it's still now happening and if they release it next gen then I hope Nintendo makes a switch 2 and the follow comes to it just to hear people like you waste you're time complaining lol

Lack of power, lack of space. This kind of game arent the best choice for the switch.

If they can do a cel-shaded version, then maybe its less demanding and takes less space.

Its a very nice portable and light and light years ahead of the 3DS, but just that.

Didn't know the people the build the switch hung out on N4G.... oh wait

Good to hear it! More games = win for customers. Fair play to Fabrice Condominas too for not bashing the Switch unlike that other idiot who worked on Titan Fall 2

The doors aren't closed, but the ME:Relays have all been destroyed. 😉

Agree 0Disagree 0
▼✖-+
SPAMInappropriate
Show all comments (46)
The story is too old to be commented.
40°