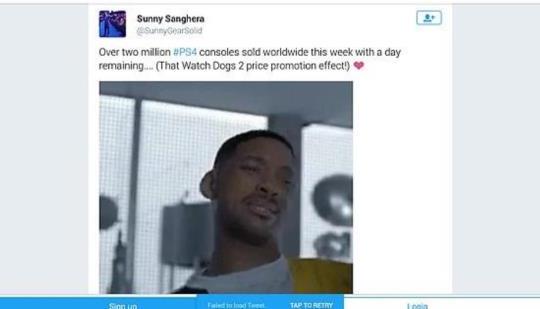 Admin note: as this is not an official Sony comment, I've changed this to rumor.

PS4 sold extremely well this past weekend and on Black Friday, no doubt about it

I am one of the 2 million buyers

I bought a PS4 Pro on day one (pre paid). And it was moving lots of consoles according to gamestop employee. You mean to tell me a couple weeks later it is picking up THAT much steam? DANG!

Just got a PS4 Pro from Amazon for $339, and am selling my day-one PS4 to someone from work.

That's how I got mine Forn. A guy i know went and got the Pro and told me he didnt need his original release unit so he made me a hell of a deal. Just the unit with controller and cables for $100.

So while technically I didnt not contribute to the 2 million... he did and payed it forward to me.

thanks for the tip...

They won't do it. They aren't price matching Amazon until after Cyber Monday is over.

I know a bunch of people personally that held off until Black Friday, bought at least two games along with it for either Christmas gifts or for themselves, good stuff.

Does not include Sunday those numbers and Sunday on Europe is one of the biggest retailing days, so probably closing on 3 million.

Sunday on Europe is one of the biggest retailing days? Hell, retail stores aren't even open on sundays, nice try tho .

It depends on what part of Europe you're talking about, many stores are in fact open on Sunday.

Depends on the country in Europe. For example in the Province of Madrid in Spain retail stores in shopping centers and major commercial areas are allowed to open on Sundays.

A month before Christmas Germany has open Sundays as well.

Maybe It's time for you to learn a bit more about EU before spouting BS.

Many stores are open in the UK on Sunday's (some have shorter hours.

There are plenty of 24/7 larger stores too (such as Tesco).

UK stores are open on a Sunday.
I live here,I should know

at all the people saying it depends where what part im talking about..... no sht, this is exactly the problem im talking about. Calling Sunday a big Retail day in Europe is completely false.

Since im from germany, you are wrong kraenk. Not all shops in every region are open. It depends what shops are doing that on what sunday.

I don't know where you live but bigger as well as smaller cities in D do have verkaufsoffene Sonntage before Christmas. I never stated that it's everywhere but it sure is a fact that especially the bigger cities in Europe do have open shops on Sundays, especially during the Advent season.

In Soviet Russia Sunday's even open you

Wait you mean all of Europe isn't the same???? Could have fooled VideoGameLab!

Man didn't know that there are a few germans like me on this site.

Most sundays of the year german stores are closed, but open sundays are something like an event where everybody seems to grab their friends or family to go on a shopping spree.

Well in the uk it's a pretty busy day but in say france everything i shut.

It's been years since I went shopping in France on Sundays but I know they started doing big Sunday shopping quite a few years ago and probably even more now.

Should wait after monday to do a count

I believe it and that''s HUGE.

So a third party event specialist is more in the know than even Sony? lol C'mon...

He knows more than you.

Well in the day and age we live in, I think I'll wait for official confirmation before believing an event person from Ubisoft. I'm quite familiar with hyperbole. ;)

@small, we'll get that alright which is more than we've had from MS in nearly 3 years lol.

Maybe they are right about that. Especially FF 15 come out just around the corner, I can see that game will boost PS4 sales.

Edit : @BigGamersSmallTalk Trust me. It will sell better on PS4.

So your theory is 2 multiplatform games that are also available on Xbox one and PC somehow pushed the PS4 to sell 2 million worldwide in 1 week? lol

No, but they helped..together with the Pro release, PSVR and deals for Black Friday.

***I mean, there are other reasons why they may purchase a PS4 instead of an Xbox One, but Final Fantasy XV shouldn't be one of them.***

Try telling that to Japan gamers. Hey, sure, no one should buy a console for a single game, but people do it anyways.

You seem to totally disrespect the fact that Final Fantasy is closely related with the PlayStation brand.

***Final fantasy is available on both platforms, so would Xbox One sales increase in Japan as well since that platform is getting Final Fantasy as well? ***

No. No, it wouldn't. XBO sales compared to PS4 in Japan is about 1% of the latter. People in Japan, if they play on a home console, do so on a PS4 or WiiU. The XBO is more a novelty item and won't see increased sales due to any third-party title. If a person in Japan wanted an XBO, it wouldn't be due to a third-party title, but a first/second-party title.

MG: XBox never did well in Japan and FFXV won't change that.

BigGamers: Why is this not believable? What, did you think XBox was really making a comeback?

At least we will get a sales update from Sony.

So you can determine if it's true or not from that.

"I mean, it is rather strange that a third party software company is stating the sales of a console they had no hand in making, isn't it?"

I don't see what the issue is. I mean I'm pretty sure companies like this have a way to make estimates on different console install bases. And I'm pretty sure their estimates are better than whatever VG charts cooks up.

Also it's not like we haven't seen this before. I remember EA released an estimate of the install bases a while back and nobody complained about them so I expect the same here.

Lmao, wonder if he's still waiting for any kind of numbers from M$ regarding xbone. Must have been a loooong wait. XD

Well I doubt we'll hear anything from Sony until PSX this weekend.

Sony not reporting numbers on a partial period of sales does not equate to Sony not being in the know. In fact, if these numbers are true, the individual would have gotten them from Sony.

An executive form Ubisoft would say this if they don't have a source. Whether they got it from Sony or some other firm we don't know.

Probably saving it for psx

Lol, so you took the time out to stop taking pictures of ps4s at targets? 😂

Maybe Sony is waiting for the PS Meeting to announce?

who said he knows more than sony? sony know the sales of the PS4 every week. so do the publishers. you think EA, Ubisoft etc.. dont get info on sales? of course they do. if you want "official" confirmation of PS4 beasting than wait for sony quarterly reports. i must warn you though.. you wont like what you see.

@BigGamersSmallTalk
This news must really be hurting you right now.

You'd be surprised how much publisher promoters know about hardware sales.

Well the PSPRO is sold out on amazon if that means anything.
To me that tells me they are selling like hotcakes.

Why would you conclude he knows more than Sony?

He only said it happened doesn't mean Sony doesn't know it has....

Yeah because he would pull that specific number out of thin air right because they would have so much to gain by saying how many consoles ps4 sold.

if it was replaced by Microsoft then they would all be downplaying it. that's how it goes.

Is this worldwide or just in the UK?

This is for the UK.

They sold 1.5 million in NPD last year alone. So 2 Million should be right for WW sales.

Congrats sony.
I guess some of you guys were right.
People was waiting for the PRO to release that would explain why the slim didn't sell that well.
I know I did, brought the PRO day one.

Sony were smart to release Pro so quickly after announcing. Of course people are going to wait for Pro, I dont see why anyone would get a slim now, might as well pay the little extra and get the better machine.

Well at least they are not buying pet rocks.

Tis like the original launch all over again. 2 million in under a week is phenomenal even worldwide.

Wonder how well psvr has sold. Still unavailable on Amazon in UK.