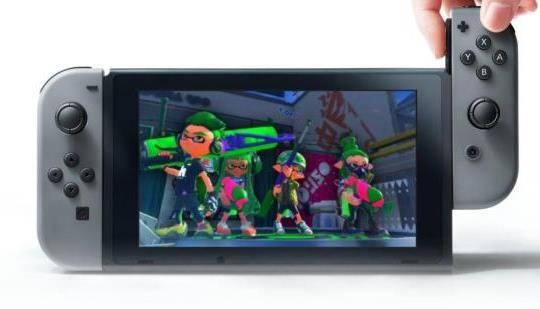 A bunch of launch game info.

Before anyone wonders: this info is coming from Laura Dale, who has been cooperating with Emily Rodgers for many of the as-of-now true rumors we once heard regarding the Switch, so this source is somewhat believable.

Now then, as to the article...

On Mario;
"The title will apparently feature a 3D open world hub from which different worlds can be selected, with multiple objectives to complete in each, much like Mario 64 or Mario Galaxy.
This may seem obvious, but we share this information to specify that this will NOT be a Super Mario 3D World-style game, where the action is in 3D but each stage is a linear path designed to be completed a single time."

On the Splatoon port;
"We have also heard that the current plan is for the more expensive Switch SKU (stock keeping unit) to come bundled with a new version of Splatoon. A big part of the push for this will be a 1 vs 1 mode where two players on separate Switches can fight over a map, switching their weapon of choice at will mid-game.
Nintendo expects the short match nature of Splatoon to translate well to handheld multiplayer, in that players need only commit a few minutes to a full multiplayer match.
There are also plans to add additional single player content to the game, and for the Switch version of the game to have a similar free content output schedule to the one the Wii U version of the game enjoyed."

Finally, on Skyrim;
"Also, that Skyrim port Bethesda refuse to confirm is real is totally happening. We’ve heard it’s planned to be a launch day release for the system, to mirror the recent remastered version of the game, and to allow mods at some time post-launch. Mod support for Skyrim will not be there from day one, and much like the PS4 will be limited to mods made using existing in-game assets."

I will hate Nintendo if they delay zelda, really !!!

Well I'm not happy about the pre-existing assets for Skyrim mods, but given this is Nintendo and it's fully playable on the go, I can't really complain. I've got the X1 version for full external asset mod support anyways.

On the switch more than any other console, its probably due to space constraints which is understandable.

I'm a Skyrim fan who owns the Steam version (just lack a PC now, since mine clunked out.XD), so I know how you feel on this one, regarding liking having better mod support.

To play the advocate, though, the mod situation for the Switch version is the same as for the PS4 version, and few seem to have taken much issue with it there; they're just happy the option is gonna be there.

Splatoon packed in makes too much sense. The Switch will be going core out the gate 😎

Having a two year old game as your pack in makes sense to you? Really?

You ARE aware that putting it on the Switch no only expands the number of players that get to play it, especially those that skipped the Wii U who are now saying they want a Switch, but also expands its content options beyond what the Wii U could handle, right?

That sucks about Zelda, I don't see me buying Skyrim for it since I'm already getting it again for PS4.

I'm not sure what I'll play at launch since I don't care for the new Mario games. I'll have to wait and see what they announce for launch. Sorta had my heart set on Zelda at launch, but completely fine waiting if they are making the game better.

If it were my choice, I'd just get a new PC for Skyrim, because the bigger variety of mods supported basically means it could last forever compared to any other version.
But the Switch will be cheaper than buying a whole new Skyrim-capable PC, so I'm seeing how that plays out.

Never played Skyrim, but I might get it on the Switch. We'll see.

I bought Skyrim on Xbox One, just made no sense for me on PS4 Pro. with less mods.

I already own Skyrim on PC.

I bought it launch day. So I've already used a majority of the mods for years now I simply wanted to play it on my PlayStation 4.

I'm not building a new PC to play the same game lol Even if I did build a new pc down the road I just didn't see me buying the Skyrim remaster on PC considering with mods the regular version would still hold up anyway.

I will gladly take one please

If true, Zelda missing the Switch launch would be quite disappointing. Packing Splatoon with the platform on the other hand is a great idea as it would ensure a healthy player base for this multiplayer focused game.

been waiting for that new 3d mario game forever since galaxy 2...

So, you missed out on 3D World? Fantastic game.

Great game but also a little disapointing considering what we were hoping we were going to get.

No Zelda? No thank you

Man....I want to know so much more about this thing.

As fast as November is going, January 12th will be here before you know it. :)

If Nintedo wants to make Splatoon competitive as an eSport then they just have to market it the hell out of it and provide constant updates, such as more weapons and more maps, more character customization, and maybe a new single player campaign and I can asure you Splatoon will be a BIG hit for Nintendo in the Esport....and if they can do that with Smash every EVO then it's a GG already.

I really want to get Switch day one if Mario is there, but I kinda want to wait 2 years so that I can dive into a nice big library of games like I did with wii u.

I never thought I'd ever see skyrim on a handheld let alone a nintendo system. Boy have things changed.

I don't plan on using the portable aspect of this system, so hopefully its enough there for me to enjoy the stationary product.

Sounds good... I will be getting the Mario game and Switch day 1

Lame. I couldn't care less about Splatoon. I'd consider a Mario bundle though. Would be a day one for me if by any chance Zelda does make launch and releases a bundle. Again, don't care to pay more for Splatoon.

If the Mario truly has the essence of 64 then that could be cool. A "new version" of Splatoon, no thanks. Skyrim was great 3 years ago. I really hope Nintendo has something else up their sleeve because these launch game rumors are pretty disappointing. I already own sports games on PS4 so a FIFA launch etc. does nothing for me.

So Mario the only Launch Title worth getting ?

You gotta keep in mind that the Switch isn't aiming to be the tech leader of the consoles.
With that in mind, a library that starts strong is more important, because it won't be wooing gamers on specs first and foremost like Sony and Microsoft have done with their most recent home consoles.
A strong launch increases the chance of sales being high enough to attract even more devs, which in turn would directly affect how many games come to it later.
In light of that, it makes sense to hope for a strong launch that will form momentum Nintendo can carry into its second year to help establish a solid foundation.

I'm sure you can.
But how many of them are coming off of two gens like the Wii and Wii U, where the launch was either filled with shovelware, or had a price that wasn't attractive on top of not enough first party to help it build momentum?

I'd say the Switch is in pretty unique circumstances.
And regardless, I still stand by my opinion that a strong launch is far preferable to a weak one.

Those platforms your thinking of had big casual audiences tho. Nintendo is making games for the "hardcore" gamer so to speak.

Not did Wii have a good launch of games but it consistently has a consistent lineup of software in the months that followed so that it didn't go through a long drought period soon afterwards, to which I say is more important in the big picture.

3rd party games coming to a handheld is amazing news!

If the Switch is capable of running those games (which I seriously doubt), it will absolutely take the market by storm.

I'm actually not sure it will. This is sort of like the PSP syndrome we're playing console level games on handheld was believed to be this big deal and even though the PSP sold over 80 million units the idea never really took off in comparison to handhelds like the DS.

I think this makes more sense for Nintendo going forward having all their games and one place then it really does for third parties putting their game on the platform because I believe the novelty of playing some of these games on the go will wear off similar to PSP.

It should be able to play them since it's a next gen home console but the fact it can't is just silly in my opinion. All this "big third party support2 talk yet two of the biggest hitters in 2017 won't be coming to it, instead we get a port of a game which came out 5 years ago.

Why does it need games that can be played everywhere else? Personally, I hoping for a much different lineup than what I already have on PS4 and PC.

i think the wiiu is testament that they need more than just their first party support. They might be able to skate by without it, but they would be far more successful if they garnered 3rd party support beyond just a couple of older launch games.

Thats just the beginning though, they need a better online infrastructure for online gaming with achievement/trophy like support. I do like that they are focusing on couch coop though they need other things as well.

Is Mario really the only game that isn't a straight up port or WiiU port? Lol, imagine owning a WiiU and already being annoyed with the lack of support it got and then getting a Switch and buying games you already owned.

wow playing Splatoon on the go is gonna be so cool!

Zelda continuing to delay Zelda is infuriating.. So the switch will be out and Zelda still wont be out for even the wii u? Pretty annoying..

Agree 0Disagree 1
▼✖-+
SPAMInappropriate
Show all comments (70)
The story is too old to be commented.
40°

Skyrim might get an Official Marketplace for it's mods