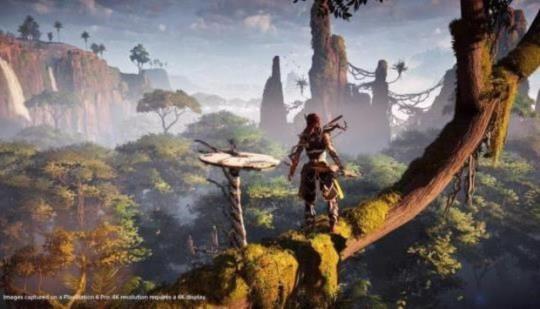 This game looks ridiculous. Yowzer. We can’t call this one a hands-on, sadly. Let’s call it eyes-on. We got to watch as Sony reps played, but that was perhaps better, since we could really focus on the visual aspect of things. The rub: Horizon…

I don't know about that! I think Sony are really smart in pushing devs to patch existing games with Pro support. There will be alot of games that will shine on the Pro, I mean Uncharted is getting reworked completely, and then there's the whole VR side of things. I think the Pro is very well positioned going forward, and the jump in visuals from existing games will make all games seem like "killer apps" if you will, especially if there is a significant jump in the visuals of VR games.

PS4 has a killer app already as far as I'm concerned. It's called Bloodborne.

Something with more mass appeal is what they're getting at though perhaps? Horizon definately looks good. I will be playing it on day 1.

Except that Bloodborne isn't being patched for the Pro - which sucks, as I've been holding off buying a PS4 since the Neo leaks, in the hope that FromSoft would improve it's framerate... Either way, you're right about it lacking the mass appeal of a 'killer app'.

Which means Horizon: Zero Dawn NEEDS to be great, otherwise people will just wait for 'AAAA' games like Mass Effect Andromeda and Red Dead Redemption 2 - both of which are likely due toward the end of 2017 - by which point gamers will be making comparisons with the Scorpio versions... I mean, aside from Horizon, what other AAA games does Sony have lined up for 2017? GT Sport is the one I can think of, but it'll be up against 4K/60fps (possibly VR enabled) versions of Forza Motorsport 7 and Horizon 3.

The console has not even released yet. I guarantee you this is just the very start of it. Bloodbourne WILL get the Pro treatment. There are hundreds of games man. Just be patient.

@Dash: Okay, let's assume I'm wrong and you're right - Why haven't FromSoft so much as mentioned the PS4Pro? The console's a week away from launch and with Dark Souls 3 having released all of it's dlc, I'd have expected sort of announcement with regards to the PS4Pro versions of Souls and Bloodborne... I guess I shouldn't be surprised - the vast majority of games receiving post-release patches are 1st Party titles.

Yet you say it WILL happen - Hell, you guarantee it... So what I - and many others - want to know is when will it happen? and why? I mean, it's not as though Sony are going to pay FromSoft to go back to work on their old games, is it? Please, enlighten us with your 'knowledge' - let us bathe in the light of your omniscience!

I don't think Sony needs it, but it looks awesome.

Agreed it looks amazing. Saw a Sony add last night where they showed some footage and I was very impressed.

Much needed? I don't know about that. I need the game more than the ps4 does lol

Honestly. How could you not want a PS4 with these kind of exclusives coming down the pipeline? Pro or standard PS4 it don't matter. But PRO is my jam.

Horizon, God of War, Days Gone etc... They will look amazing, even on a standard PS4.