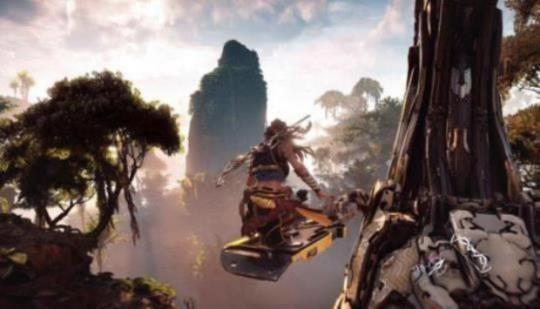 Guerrilla Boss: Horizon a Huge Technical Accomplishment, It's 4X as Complex & Huge as Any Killzone

Guerrilla's Hermen Hulst stated that Horizon: Zero Dawn is a huge technical accomplishment between how detailed and how vast the world is. It also ahs four times as many features as any Killzone game so far.

Adhttps://store.steampowered.com/app/1488200/Symphony_of_War_The_Nephilim_Saga/?utm_source=n4g&utm_medium=native&utm_campaign=sow_n4g_native&utm_content=png
- Comments (69)+ Comments (69)
TopNewestOldest
Expand all
The story is too old to be commented.

exactly. can't wait for this. but still, I hope they won't abandon KZ totally. I'm still waiting for an FPS as amazing as KZ2 from them!

That game was crazy. The way enemies reacted depending on how they got hit was so immersive

KZ2 was awesome. This game and Spiderman has really got my full attention.

Their sister studio Cambridge is taking over Killzone series. Cambridge already prove enough they can handle the series since they made Killzone Mercenary

When i imagine killzone sequel it's brutal , dark atmosphere and very detailed. We need something like that.

Gameplay is hard to explain KZ2 was a great and unique step at the time. I want the same impact if not more.

Here is an idea, why not go big like battlefield?. Killzone is compatible with this concept, infact that's what i loved about killzone 2.

I am pretty much set as a gamer.

great to see KZ2 love among fellow gamers here. the game was simply amazing. yeah, Cambridge took over and delivered with the best handheld FPS in Mercenary but I still hold KZ2 very highly in my heart as one of the best FPS I ever played.

but for now, Horizon is looking like another sure hit

KZ2 is one of my favorites of all time, and that Colonel Radec fight made me want to break my controller 😂😂

You should try any shooter ever if killzone blew you away with its many shades of brown and broken controls. I'm sorry that was rude enjoy fisher prices my first shooter.

KZ2, Black, Battlefield2 BC and Half Life 2 are my all time favourite FPS. KZ2 is clearly at the top of my list in terms of gameplay feeling. Its just my cup of tea.

No wonder its the only game I want to be remastered.

As for Horizon, what can I say? I have pre-ordered 2 games my entire life; Dark Souls 3 and Horizon, nough said.

K2 multiplayer was so ahead of its time with its graphics, the ever changing objectives and 16vs 16 action. Hard to duplicate how good it was. One of my favorite shooters. Oh and that satisfying chirp when you got a kill in mp.

man, I feel like such a nerd for laughing to this.

Shaping up to be the greatest RPG of all time.

The gameplay videos haven't failed to impress me yet.

It was fun but needed polish. Aiming and combat mechanics were off, but the world was vast.,

How exactly wete they off?

@Aurenar thats what strukes me ass odd.Ive read every preview to date about this game and have never seen anyone complain about the gameplay/controls but instead praising that its fast and fluidother than him

I think it's just that he was getting to grip with the controls...I doubt Guerrilla would make a mistake with combat mechanics since they're used to doing ranged combat with Killzone.

It would really help if he'd just explain why, rather than just spamming Horizon articles with that same old nonsense. Literally nobody else that's played it has said that.

It's really hard to tell just by watching, but nothing about what I've seen since the first reveal made it look like aiming or combat mechanics were "off". Seemed pretty tight to me in fact, and the E3 game play was very fluid, particularly in combat.

You played it already?

"It also ahs four times as many features as any Killzone game so far."

What does that really mean?

I believe it should be "Has" 😂

Not being a smart 'ahs'. I'm not sure what they mean with 'many features'.

I wonder that too. Far too many people use these generic terms as selling points when they don't even mean anything. More grass? Four times the clouds in the sky? More freckles on the character? Of course I'm only joking with those, but those things do happen. I'm so excited for this game. I've been keeping in blackout mostly to calm hype and all

Maybe he just means there are 4 times more mechanics than killzone.

Most interesting new IP I've seen in a long time. Fortunately they were given a break from KZ as they clearly had more to give.

True, but then again I always thought the Killzone games were underrated.

Of course it is. It's an RPG. RPGs are supposed to have depth.

Just because they are supposed to, does not mean they always do.

They are merely marketing the complexity of their game. Were they supposed to tell you it lacks that?

Umm....... I don't mind them advertising, but why hype it? Anyways, this feels a lot liek Witcher 3 gameplay wise, so yeah it might have depth.

"I don't mind them advertising, but why hype it? "

I see. Look up what marketing is, it's clear you don't get it.

But GG hired the writer of New Vegas and some devs from Witcher 3. So I think the game going to have more deep than standard RPG.

Guerilla Games has Hundreds of developers I believe they only hired three developers from The Witcher 3 and one writer from Fallout.

Mind you, those developers from Witcher 3 where recent fires they've been developing this game for over 4 years. Soooo yea. 3 people are not making this game. I think it will have deep RPG features, but not based on their new hires.

Every game is an rpg nowadays (according to n4g)

Actually every game is an RPG by definition because you are role playing as some character... I think it has been a long misconception that RPG games are just those where you level up

only idiots think rpgs are games where you level up, even worse are the ones that believe every video game is an rpg because you play a role. You are one of them.

Already have it preordered

Having to recode the Killzone shadow fall engine [version], to stream its capabilities on a vast open world scale is a feat in itself.

It does look amazing. I cant wait to see what it looks like on my own 4k hdr tv instead of off screen ect.

Well technically it is only "possible" on Playstation.Do you think MS or Ninty would highlight a project suxh as this?

for many reasons, you're wrong. first party titles can't be on other consoles, for one. some ideas for characters or content might not be allowed, for another. there are also limitations like hardware or controls. so you're wrong.

The game looks great but it's made by Guerilla. They have to earn that can make a deep game all around. Personally never loved any killzone. Thought they were extremely medicre and lacked flow and feel. We shall see with Horizons

personally i disagree with everything you said. except that this game looks great.

I doubt you played Killzond, judging by your second to last sentence.

I find the Killzone universe interesting. Killzone 2 is the most immersive FPS Ive played.
the AI was impressive (Companians could be a hassle sometimes)
Physics were amazing and probably still better than most games.
Controls were different, weighty and physical. all weapons handled significantly different.
Lighting... that game have some sick lighting and effects.
There is so much to love about Kz2.

Have a look at some of these, I posted like every gif there is but what the heck it is soo good. :D
Gonna have to turn on my Ps3 this weekend. ( ͡° ͜ʖ ͡°)
http://i5.photobucket.com/a...

Have you ever cooked a grenade and shoot a rocket over it as it explodes?

If not I recommend trying it at least once. :)

You only know them from Killzone so how do you know what they can or can't do?

That's like saying I'm not sure if CD projekt Red could make a good game with a gun in it with cyberpunk simply because they've never made one that doesn't mean that they're going to fail.

Hermen Hulst is a pimp.

That 4x figure doesn't really mean anything. Since Killzone titles were all linear and the processes involved in building each game will be different. Open world games tend to be less curated, whereas linear games exercise careful control of every interaction the game has with the player.

I mean Just Cause is like, 100 times larger than Uncharted 4, but that doesn't make it a better game. I'm not saying Horizon doesn't look great, but they should focus on its meaningful merits. It would be much more interesting to know how large it is in comparison to a similar open world game.

My most anticipated game for the next year.

Am i the only one who wants KZ2 Remastered?

I would love it, a whole remastered trilogy would be badass. Kz1 would probably feel quite dated, but Id play that too.

Hard for me to get excited for this game. It looks good but the gameplay so far just seems stale, like a Shadow of Colossus with robot dinosaurs. Killzone was a bland series and Guerrilla really hasn't proven they can make actual fun games. So I am definitely skeptical when it comes to this game right here. Especially with all the other games this gen which promoted flash over actual substance.

the gameplay doesn't seem stale. it's nothing like sotc, killzone was not bland. lots of people have had actual fun with their games. horrible trolling.

I would hope so considering killzone had the size and complexity of a wet paper towel. Super excited for horizon but these guys should distance themselves from killzone not try and draw comparisons.

This is one game that'd make me consider getting a PS4 :(

At face value, this sounds like Guerrilla might be pre-empting some performance issues. Launch is still several months away so maybe I'm donning more tinfoil than is necessary. And anyways, GG has been nothing if not phenomenal at releasing/maintaining largely bug-free video games.

Horizon and Spiderman have my attention.

Agree 0Disagree 0
▼✖-+
SPAMInappropriate
Show all comments (69)
The story is too old to be commented.
80°