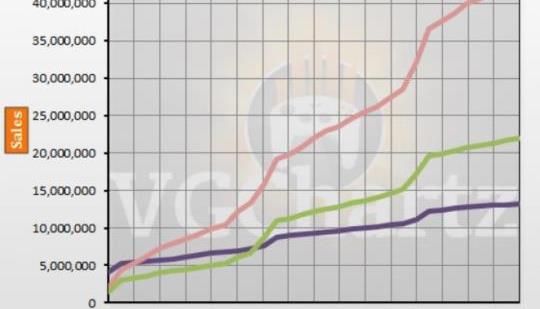 - PS4 having 55% of the 8th gen market is pure beast mode. It should begin to sell at a faster rate than Wii did at the same point in its lifecycle again sometime next year.

- XO continues to sell at a slower rate than PS3 at the same point in its lifecycle despite having much more aggressive flash sales & price cuts.

- Wii U is 3.5 years old and still hasn't outsold Vita at this point.

Fanat-X like to say that xbox one global sales is catching up to the ps4s global sales ,lol. A lot are saying this because xbox one won npd sales for a month which only tracks sales in the US and not globally. They also think just because their neighbour decided to buy an xbox one ( which you can get for almost half the price of a ps4 with 4 free games) after years of being bombarded with propaganda and being told to buy a xbox one that its outselling the ps4.

You talk to most fanat-X now and theyll tell you microsoft xbox has the most powerful console . Theyre referring to the xbox scorpio which isnt coming out for atleast another 14 months or so.

Are you making up comments to reply to or something?

You certainly are imaginative I'll give yah that.

Again with the fanat-x BS

Man u got issues

Agreed. Sad too, MS made the most solid console they've ever made this gen too. No huge issues like RROD. They just need to continue to build consumer trust and I think they will be fine. They can't keep having random "RROD" or "DRM" or "INTERNET ONLY" or "TIMED" or "COMING TO PC" lol

Its like, be transparent about what your doing and the install base will be solid. As of right now, we don't even know how much of that 22 million would have even got a XONE if they knew all those exclusives would be coming to PC. MS next gen needs to be 100% with their install base if they want to have consistent sales.

As of right now, PS is the most consistent console install base in gaming history. I think MS can at least start getting to near that level of consisitancy if they don't continue to keep hitting their fans with "but wait, we have more to say" lol

Everyone XB release as been a series of "but wait....we forgot to tell you" lol. That isn't helping them in the long term, its actually hurting them big time.

Got XB for Bioshock, then next gen never got XB.

Got XB for Mass Effect, then next gen never got XB.

Yes....someone is a fan of those games, but they won't buy a system that sorta fooled them. They will be fans of the games first, before the platform. MS has a long way to build that long term trust with consumers.

The Wii was a special case, traditionally a consoles strongest year will be somehwere between 2-4 years of it's lifespan.

Just have in mind that vgchartz is estimates from people not in the industry. They are getting their numbers based from information they find online and good old guessing. Sometimes they hit pretty close. But it's not a remotely reliable source.

wasn't there an article which said that the xbox one sold more than ps4 in july? EDIT: my bad comment below explains it

Wasn't that NPD and not Global Sales?

oh okay thanks for clarifying

It;s not your fault for the mix up.

For some reason articles head lines about NPD sales will be something like "xbone wins August", instead of the much less title baity and much more accurate "xbone wins in NA for the month August".

If you've been on here you'll recognise the normal title. It's a pet peeve of mine.

This is the way it should be. I'm an Xbox guy, but imagine the bullshit Microsoft would pull if Xbox was solely monopolising the entire market.

They offer much better deals for the consumer when they're trying to play catch-up. Compare their disastrous launch to now - they finally seem to have a positive footing in the gaming community. Shame Nintendo seem to be the only one's staying in the wrong.

So it better for Sony to have it and never drop the price?

As a Xbox gamer, I kind of like them being behind because it benefits me.. but it's not really fair to make that claim when it doesn't really matter who is on top, they all become complacent

"So it better for Sony to have it and never drop the price? "

Why should they if the product is selling well?

You do know that by dropping the price they decrease their revenue. As long as the product sells well they shouldn't drop it.

If Microsoft can't sell the product at a higher price point there their problem not Sonys.

Whoever has the market can do what they like.. if they didn't have such a lead, the price would have dropped.. you'd see them pushing 1st party harder etc

Is that a bad thing for consumers? Because I sure don't work for either company

As in push them harder to deliver quality titles?

They are doing that you know.

"Whoever has the market can do what they like"

Sure they can raise the price for the PS4 to 500$ and include strict DRM if they want.

You know that's not true. If Sony screws up with the PS4 gamers will abandon them and go to Xbox.

You are just dodging my point.. I'm done with you

@n4rc, The thing is, Sony pretty much NEED Playstation. Microsoft don't have the same investment as they're more focused in other areas (ie Windows). Plus they have so much money that they can afford second place. So I'm less concerned for their financial situation.

But obviously it does work the other way round, as the PS3's lacklustre launch with its overpriced console showcased. Sony then caught up and won that generation and seems to own this one too. Microsoft are finally on track and Scorpio should hopefully prove that next gen.

Meh like you had a point to begin with.

Kiz pretty much nailed it. And he's a multiconsole gamer to boot.

You cannot say anything even approaching criticism of Sony on this site without being down-voted to the 7 hells. You guys need to grow up. He is making very valid points. Take of your Sony blinders for once. You guys are worse than Apple fan boys now.

To be honest, Microsoft first party is very predictable when come to Halo and Gears of War.

PS4 outselling xbox one worse than what xbone is outselling wiiu by. Wow. It will be interesting to see what happens with the scorpio with the low attach rate of 4k tvs so far. I LOVE my 4k tv and if scorpio proves to provide the top games in 4k I will more than glance in its direction. But MS is shooting itself in the foot even bringing up 4k gaming as the scorpio will not be able to provide it on anything more than the least demanding of games. With a high price of entry, the realization that it cant deliver demanding games in 4k, the scorpio wont even reach wiiu numbers.

And PSVR is about to hit.

Its gonna be the item of the holidays.

here are my numbers, you can trust them aswell. Cause I made them up myself:

totally accurate, since I made them up just like VGFARTZ

You can cay PS4 is the 360 of this gen. Lets hope it doesnt mess up as well.
But why use vgchartz?

That is a huge insult to the PS4. The 360 had its market share shrinking continuously since the release of PS3 but the PS4's lead is only getting bigger by the days.

The 360 were selling at a slower rate than the supposedly "a failure" PS3 whereas the PS4 is matching the PS2 - the best selling console of all time! Think about that for a second before making that ridiculous comparison.

If you mean that PS4 is offering up compelling games that people want to play, thus buy the system for, then yeah, I agree in that way, it's very much like the first half(or so) of 360's life.

I too hope Sony doesn't change that model, and continues to deliver on the content. Thing is though, Sony also does deliver on that casual content that doesn't drive the hardcore interest. They're doing it now, they did it with PS3, they did it with PS2, and PS1. At the same time, they continue to support the hardcore, because Sony knows you have to support all the marketplace as much as possible where it makes sense to actually make your brand appealing, and that having a hit at one point, doesn't guarantee ongoing success.

I guess the Ps4 count is accurate-ish. It's probably more as per http://www.dualshockers.com...

DominStation! I'm curious to see what happens with PSVR, slim and neo. Wow at the 55% of market share, congratulations to Sony.

Show all comments (35)
The story is too old to be commented.
20°Fresh