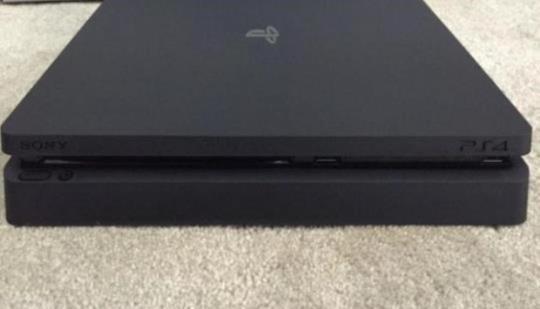 The PS4 Slim is Ugly

While it is exciting that a new piece of hardware is on the market, can we really be excited about something so ugly?

Adhttps://store.steampowered.com/app/1488200/Symphony_of_War_The_Nephilim_Saga/?utm_source=n4g&utm_medium=native&utm_campaign=sow_n4g_native&utm_content=png
- Comments (154)+ Comments (154)
TopNewestOldest
Expand all
The story is too old to be commented.

however, PS designs except for the OG PS3 have always been utilitarian. something that works in the background around the main TV/display...

I agree, I think it actually looks cool and covert!

It might grow on me. The PS3 grew on me considerably, and became one of my favorites. PS4 also grew on me, so there is hope for PS4 Samwich. The PS3 Slim didn't.

i like the new design ..though why its missing the led stripe ? i like the subtle color light on og PS4, it gives to it a character

@donthate
Burnt toast would have been a lil more accurate...lol. But seriously I think it looks nice, not as cool as the original ps4 but it looks nice and simple.

I believe the PS4 slim is the best looking console shape of this generation. It has a look that works well both in an entertainment center and as a stand alone product. I'm just being honest, and anyone who knows me knows I don't like Sony as a company, but I think they did quite well in designing the slim.

Definitely minimalistic, and total win to me. I think it looks on par or possibly better than PS4 actually. I'm more interested in the Neo though... This would be cool as a second console though, for kids or to bring to people's houses.

It certainly does look cheaper than the original unit but not ugly. Maybe this one will be $199-$249 entry price model?

Geez and some say the internet and this site in particular are ps biased
Ive seen only good reactions and comments about xb1s looking 'cool' despite far from being perfect imo and this ps4 slim looking nice too and most of all really smaller and practical gets so much hate already on the internet.
Thats a bit disgusting seriously

If they added more USB ports to it, I would upgrade.

If it allows people to get a PS4 at a cheaper price, runs cooler, uses less energy, etc. then it's aesthetic design shouldn't be an issue. It looks like an improvement over the PS3's Slim models

Tell that to everyone who bashed the Xbox One, PS3, Original Xbox.

Exactly, function over aesthetics in the end! I do think the OG PS4 looks better still, and the X1S looks better than the OG x1 lol

On topic: are you serious with that opinion piece. Who on earth approved this story. What's wrong with you lot? lol

Sorry bruh, not all articles can be in favor of Sony. If all dissent is silenced then Sony won't be able to improve.

So in the future please think critically about which articles will help or hurt either company. Oh wait, I think you already do. ;)

This is the first "slim" version of a playstation console that doesn't look better than the original. I bet it looks like this because the Neo is going to be extremely well designed and Sony needs to distance it more from the original(or slim now)

Nah, it isn't the first Slim version that looks worse than it's predecessor. The PS3 Slim was way worse than the PS3. The original PS3 although looked slightly like a vase looked like a high end piece of electronic. Fast forward to PS3 Slim and it looks like a cheap piece of plastic.

PS4 was decent, then they made the cover matte and added physical buttons, not as nice. Then Sony made the PS4 Sandwich:

For some reason, I feel the launch console is the best looking one with nice proportions. Even the PS2 Slim wasn't as nice as the launch one albeit significantly smaller, and one of the prettier slims.

You can tell how serious I am from all the dots.....

Yes, but when the beholder is someone whose had both eyes stabbed out it's time for some tough questions to start getting asked.

Though, TBH, this thing looks very similar overall to the current PS4, only a budget version (which is basically what it is). At the end of the day you'll never look at the thing and it's understated enough not to draw attention to itself so it doesn't really matter.

I just wish console makers would invest in making their systems look like sleek AV equipment.

Who told you AV equipment is sleek? I assume you don't own an AV Receiver. Imagine a black shoe box sized mini furnace with a digital display on the front - not sleek in the slightest but it must sound great...my neighbors are always commenting on it :)

Exactly. I'm not sure if any of the people have seen the vid of it under the TV on an entertainment system. It actually doesn't look bad at all. Just sitting out by itself, it doesn't look as good. But people are going to complain no matter what. I really think what's more important is that it plays games. O_o

What maters is that your able to play the games you want to play on them.

Ps4 S(ame) is an ugly console where once again Sony removes features rather then adding.

Funny how everyone said MS releasing XB1s a year before Scorpio was confusing.
Now Sony is releasing a PS4 slim at the same time as their Neo, and a VR system, and a new hand held if rumors at true (LMFAO at another handheld Sony won't support).

Oh and lets not forget Sony going BACK and stealth update a month old post stating they are increasing the infirior PS+ netwotk memberships to match the supirior Xbox Live networks cost.

LoL oh Sony, you're lucky you were in the gaming business before MS to establish brand loyalty....because you are so far away from doing anything #4thegamers.

The slim was nice the Super slim was trash

I have a super slim. It's not THAT bad but I honestly would have preferred the regular slim. It's really easy to lug around though since it's so light.

I have the ps3 slim and its very quiet but yes that super slim was pretty bad. This one isn't much better but it doesn't matter if you can hide it. As long as it's efficient and quiet that is what matters.

Ps3 slim was sexy super slim though was ugly

Super Slim was cheap and looked like tupperware but for the time, it served as a really inexpensive system.

nah mate, it looks sleek. best looking sandwich ever, don't see how you peeps can hate it.

I like the slim design, but won't be buying it just going to get neo and have my cod black ops 3 ps4 as my back up

Yep, it is ugly and looks like a cheap piece of plastic box.

Yet this is touted as a pinnacle of beauty and industrial design (Xbox one S),..
http://images.mentalfloss.c...
Give me a break.

Think It looks ok. Hope it is cheap and quiet enough.

The Xbox One S actually has a pretty nice look to it though, especially when the OG Xbox One was basically a VCR, haha.

Quite a contrast to the Xbox One S in terms of style and design.

damn....that was savage my man

Woah you're so edgy

Personally I find the original PS4 design better but that's just me. I find it has a more unique look and I love the blue light when starts up which this seems to have omitted for the most part.

The OG Ps4 has character. For me personally, the glossy part and the LED light strip made it distinct and quickly recognizable this slim just looks generic, cheap and ugly. Thank God i'll be getting the neo instead and hopefully Sony does a better job design wise with the neo.

Looks good to me.

I think it looks good.

Of course it looks good, like I keep saying before it's looks like the original ps4 but with out the led light and its smaller. Only reason some stupid article comes up saying it's ugly is because a lot of morons saying it's ugly to them and the site want clicks.

I have to agree. But then again I'm not getting this. My eye is on the Neo so doesn't matter to me but it is ugly. OG Ps4 looks much better IMO.

Ha! Get it right the first time and then when it is time to drop the price, drop it the right way. Do not make the slimmer version the better of the two... It's effect is to late. You all see backwards due to having to move goal posts.
This version is the cheaper version. It is time to sell it for a much lower price.
The Xbox one S is already dead so why care about how it looks? The new Xbox comes out next year.

I agree. Personally I prefer the look of the original PS4.

Luckily already have a PS4, not blown away by this one, it's pretty ugly to be fair.

uh... it looks just about the same as the OG PS4... except not as tall, and rounded corners...

that photo is deceiving because it makes it look like it's a rounded square, but they've actually kept the same rhombus-like profile.

I think it looks alright, but I think the og looks better.

If this system is priced at $249 than I doby see many caring. The ones who already own ps4 are hating on this leak. This system is my meant for you. It's meant for new gamers on the budget and families

Come holiday season price sells. If now ps4 slim is $249 than on black Friday it would be $199.
Think about it for a second

I like the look. Looks sleek with the rounded corners and the flat top makes it look even more compact. If I didn't already own a PS4, I'd definitely get the Slim over an OG model.

You can't just come out and state a subjective thing like this as a fact.

Also, when you game, you look at the console none stop or actually looking at the game? Just wondering.

Actually, the article is marked 'opinion' which are literally subjective statements....so....yeah....

I think it would look better if it had the same sharp edges that make the base PS4 so beautiful. Right now this kind of looks like it's made out of foam to me