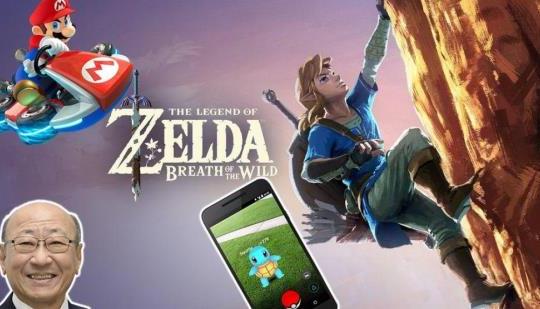 Nintendo is Best When Allowed to be Themselves

Nintendo Prime: "Nintendo has recently gotten a lot of credit for Pokémon GO. It’s true that, outside of pushing for the partnership with Niantic after Niantic and the Pokémon Company were already in talks, Nintendo virtually had nothing to do with Pokémon GO beyond green lighting the project and paying some of the development costs. Most of the credit for the success of Pokémon go lies with Niantic themselves, as Pokémon is literally built upon the setup that Ingress created.

What I am trying to get at is that Pokémon Go is a success because Nintendo didn’t get in the way, as they easily could have given they do own the Pokémon trademark. Nintendo’s actual role in this game and the success of it stems simply from their support of the original games back in the 90’s. Nintendo, in other words, doesn’t really deserve much credit for this success.

But, that isn’t to say Nintendo isn’t showing signs of “turning it around”..."

Attributing Pokemon Go´s success to Nintendo is misinformation. Look for the company behind the app instead of Nintendo, they had little to do with it and only reek 10% of its revenue.

Except Iwata is responsible for the decision and Nintendo owns the IP of Pokemon so there they get credit for it.

@MoonMan Check the WSJ and Forbes… since they are “bad” sources and have each articles on the matter.

Well they are bad sources when it comes to video game news....they don't have experts on video games writing for them...

I saw the wall street journal post an article about Nintendo a while back that had a blatant lie right in the middle of the article and when I checked it again about an hour later the lie had been removed. Yeah forbes and wall street journal are shady and I don't trust them with their almost always negative slants on Nintendo.

Zeldafan64- You keep using games journalist for your info - obviously they are at the top of the journalism, industry and are widely known for professionalism and accuracy -
The rest of us will just have to take those rags like the Wall Street Journal and Forbes for our news
Seriously do you really think they "lied" about something re Nintendo and Pokemon???? Why would they?
If they made a mistake they will make note of it and correct it- But their info is much better than your own- The partnerships involved in Pokemon, Niantic and Nintendo are not nearly as straightforward as you and many think when it comes to the revenue and earnings of Pokemon, Pokemon Go etc
Alot of it will depend on how much if any $ s the Pokemon Co and Niantic decide to distribute to their investors as well - They don t just hand over all their money coming in when they receive it and Pokemon Go was surely a large investment to develop and advertise for considering a near world wide release- The had Super Bowl commercials last year - they most expensive TV time that can be bought

if niantic made their own ip using the exact same 'gameplay' mechanics found in pokemon go, but with their own characters completely unrelated to pokemon and the pokemon universe- it would not have been a success.

pokemon go is a success because it is a new and interesting take on the pokemon games everyone knows and evidently loves.

why shouldnt nintendo get the credit for that?

Ninatic used Google´s GPS for sourcing location information. Nintendo is only owns roughly 32% of the company and they would have not had the initiative to roll out a smartphone game by their own initiative. Yes they own a third the original IP to the Pokemon franchise (read bellow) so do the math. I didnt make those 10% out of the blue, that actually came from an IGN analysis although looking at the number presented it doesn´t take a rocket scientist to get there.

————
(The Pokémon Company (株式会社ポケモン Kabushiki gaisha Pokemon?) is a Japanese company that is responsible for marketing and licensing the Pokémon franchise. It was established through joint investment by the three businesses holding the copyright on Pokémon: Nintendo, Game Freak, and Creatures.[1] It began operating in 1998 and adopted the moniker Pokémon Ltd. in October 2000.[2] The company is headquartered in the Roppongi Hills Mori Tower in Roppongi, Minato, Tokyo.[3]

The company has separate divisions that handle operations in different parts of the world, with The Pokémon Company International supporting the territories outside Asia, Australia, and New Zealand. In South Korea, the operations are handled by Pokémon Korea, Inc.[3])

" that actually came from an IGN analysis "

That right there is more than enough for anyone to hold reasonable skepticism.

Besides, I think we all know that Nintendo's had at least a small amount of say-so regarding decisions in development in regards to this title.

You may want to read the editorial, as Pokemon Go is talked about, but specifically mentioned

"Most of the credit for the success of Pokémon go lies with Niantic themselves, as Pokémon is literally built upon the setup that Ingress created.

What I am trying to get at is that Pokémon Go is a success because Nintendo didn’t get in the way, as they easily could have given they do own the Pokémon trademark. Nintendo’s actual role in this game and the success of it stems simply from their support of the original games back in the 90’s. Nintendo, in other words, doesn’t really deserve much credit for this success."

Exactly, not only did Nintendo get in the way as they have nearly nothing to do with it. Except licence the IP “Pokemon” which they only own 1/3 of. Ninantic is also a 1/3 theirs…

Looks like you are the one with the miss information.

Pokemon is popular because Nintendo made it popular by releasing great games. Pokemon GO is only popular BECAUSE it is pokemon. Get it? Nintendo gets more credit for the game than anyone. Look at that garbage VITA game everyone says GO is copying, why isn't that considerd great or popular? Because its not pokemon.

The article addresses that quite well in two accounts:
- “What I am trying to get at is that Pokémon Go is a success because Nintendo didn’t get in the way”
- But, that isn’t to say Nintendo isn’t showing signs of “turning it around”…"

Besides that wasnt my point, it was the revenue that Nintendo gets from this… way less than people think. It will be a short lived fad anyway. The app is too shallow be relevant for very long.

When has Nintendo NOT been themselves? They have always gone to the beat of their own drum and created memorable experiences.

I do completely agree that Nintendo has "always gone to the beat of their own drum", but for quite some time now, they've been failing to deliver the solid gaming hardware and games that people really want. Not so many "memorable experiences" lately, just mediocre stuff.

The hardware has been solid as far as I'm concerned except for the poor battery life of the Gamepad. Hopefully the NX will have an improved Gamepad, slimmed down with better battery life.

What are the Best Moves for Gengar in Pokémon Go?

The 10 Best-Looking Shiny Pokemon Across All Regions

Pokémon GO To Have A Crossover Event In June

5 Years On, Cuphead Proves The Virtue Of Being Patient