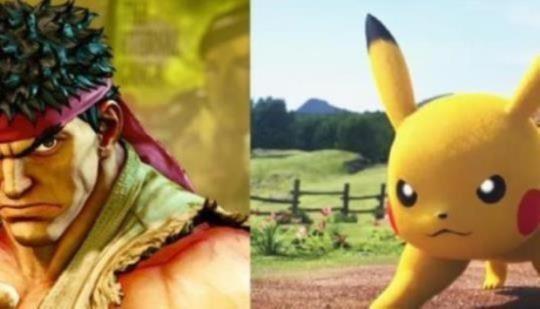 no matter what ..SF5 was nt good ..fairly Pokken had surpassed it in sales

SFV should never have been exclusive to begin with and Capcom knows this. Now how do they make good on their word to Sony while making a version for XB1...? They need to find a way to recoup the $$ invested.

To be fair, VGChartz is very very shady of a source to use. Fudged numbers, corrected numbers that are stealthily added in when true numbers come from a real source, etc.

Anyway, I'm sure Pokken Tournament has done this, though. There was a lot of talk in the GAF NPD thread.

They do. I use it for "rough numbers" kind of thing. When NPD is slow, you fall back on VGChartz.

gaf and vg are joke sites. Both should be banned period.

While vgchartz is a good indicator for console sales even if it is off by 1-3 million sales at times when the numbers are adjusted, I think vgchartz has had a pretty poor track record when it comes to tracking actual game sales. It's all purely based off estimates. I really wish these publications and websites realized this so they'd stop publishing articles based off of vgchartz.

Um...what?
I'm just stating that vgchartz is purely based on estimates and they've been known to be completely off on games in the past.
I'm mainly an xbox guy and street fighter 5 isn't even on xbox one so your argument against me is null.

basically instead of giving props to nintendo/game freak for releasing a good game that out performed the number 1 fighting franchise in history with less than half the install base you choose to focus on how vgchatz has been unreliable at times in the past....thats the point @dabigkahuna76 was making...lets not play dumb and pretend that the hate nintendo gets doesnt come from everywhere literally...you have no dog in this "fight" yet still couldnt help but subtly discredit nintendo in an indirect way

If you go through my comment history, I have never ever discredited or spoken against nintendo on anything.
Heck, I barely even speak outside of xbox stuff.
My original comment was more about the credibility of vgchartz and professional sites' use of vgchartz rather than anything else. I don't have an agenda against nintendo (something that you're directly implying).
Are you to say that I have no voice when it comes to things that I don't own?? That I should have no opinion when it comes to questioning vgchartz tracking even when it's been documented how wrong the site has been with their guesses? And wouldn't you think that vgchartz's inaccuracy could possibly lend to the completely opposite outcome, considering that a small difference of 10,000 copies between the two games exists?
My comment applies to any vgchartz submission. The site has no networking ties that allow the owner to accurately measure the sales of video games and we all know that.

So please, the next time you want to call me out over something that I am not even remotely close to feeling, please think to actually ask me to clarify on what I mean to say if it isn't already clear before making accusations.

Pokemon has a wider appeal than Street Fighter.

But it's on a complete and utter bomb of a system compared to the PS4 and was not given anywhere as near as much hype or marketing.

Not to mention the Street Fighter franchise predates Pokemon by several years.

Like I said, Pokemon has a wider appeal than Street Fighter.

yet SFV flopped so badly it's not even sold half pokken number in japan it's country origin look at media create number lol.

not just wider appeal, Pokemon is one of the biggest franchises in gaming. Every game sells 10 millions minimum. It's even bigger than Call of Duty.

Pokemon spin off games are lucky to sell 1 million in most cases. This isn't a mainline Pokemon game on Nintendo's handheld platform. Its a spin off on the Wii U. Not sure what made you think every Pokemon game sells 10 million. Wtf

its amazing it sold better than street fighter. well done to nintendo/namco

Pokkén Tournament is a complete game, no surprise at all, it really deserves better sales than SF V.

so much for not going full multiplatform. i have 4 on steam but had no interest in 5 i dont support that type of practice

10 bucks says this doesn't take digital sales into account, in which case SFV would be in the lead easy. See, on PS4, there's this thing called a "hard drive" that allows you to buy games digitally and store them. On wiiu, you don't have that, it's a separate purchase, and most people don't have the time or patience to set an external up based on the system's awkward guidelines for them TL DR, it's hard copies only.

Off topic; Is Himalayan salt really that much better for you?

You would be surprised how many people go digital on Wii U.
External HDD's aren't hard to get.

Sony and Capcom whiffed on this game. How in the world does a Pokemon fighting game beat Street Fighter? Pokemon is known for RPG's. Capcom is probably wishing they went multiplatform right about now but then if they can't sell with an install base of well over 30 million it probably wouldn't of helped much anyway.

Other than a HD remake of Twilight Princess, isn't Pokken like the highest rated WiiU retail released exclusive on WiiU this year? In fact what 3rd party games has it come up against?

So it's had no compition, on a console where the user base are starved of games.

Street Fighter, whilst not having a awful metacritic (in fact same as Pokken) got a lot of flack for lack of content.

So not one of its best titles in the series, on a console where the players have a choice of great exclusive and 3rd party games like R&C, Dark Souls 3, PvZ GW2, The Division, Mortal Kombat ect (all those have a reviewed better that SF) kinda understandable.

The only way this would be a shock is

- If Pokken had sold like a million more
- If SF had been an amazing game full of content and gotten great reviews.

... did it have anything to do with SFV being incomplete on release?

Not a shock at all. There are very few hardcore gamers on the PS4.

Haha you need to cut down on your salt intake being so salty is not good for your health.

Pokemon is popular and lets face it there is not a lot of games on WiiU so it sold a lot also does this take into account digital sales?

That's not a lot really, considering it's what 4 years old?

And I bet most of those 740 are VC games like NES games ect so it's not like they are new games.

I stand corrected the PS4 has 1030 games in total.

Which considering the WiiU had a 12 month head start is pretty poor and shows why it's lacking in sales.

It doesn't have enough games.

Didn't capcom said they sold 1.3 million copies? Are you saying it sold half on the PS4 and half PC? Yeah right I bet it sold 1 million PS4 and the rest on PC. Vgcharts needs to die.
Not only they never get it right but they stop updating numbers 2 months after games releases.

People need to understand the reason SF5 bombed wasn't because it was exclusive. Many people felt the game was coming up light on content not warranting a $60 price tag.

The release now patch later attitude came bake and bit them in their rear ends...

The stupid thing is it didn't sell by a lot more, and this is all being used to imply Pokken is a better Fighting game than SFV lmfao. Maybe more fun casually, but if you're into the competitive scene there is zero contest.

It's funny how vgchartz is banned/unreliable when 2 months ago I had a huge argument with Sony fans about the 360/PS3 and which one sold more, which based off of previous press releases and the most recent official numbers the Xbox 360 is ahead, they relied on VGchartz numbers to dispute the only official numbers.

Unless you can prove that every person who disagreed with you and used VGC as proof is now claiming VGC is BS your whole post is pointless.

You do know that PS4 owners are not a hive mind right?

You need to be stop being so salty.

You're the biggest fanboy of them all writer85

I'm a PS4 owner as well, I'm just saying that moving the goal post back and forth is a typical thing

Oh no! Some random person on the Internet thinks I'm a fanboy!!!

I should now totally be upset and angry at them because their opinion must be 100% correct...

But unless the people in that thread who used VG chartz are in this thread now saying VG Chartz is BS.

There has been no moving the goal posts.

Um. Street Fighter is sold over 1.4 million and Capcom said that the PS4 was the biggest seller. If PS4 has the majority of 1.4 million and half is 700,000.... Yeah we don't know the break down but there's some odd math going on..... I know people wanted it to fail but come on...

It shipped 1.4million not sold

That's a shame and Capcom should have never went with the bribe check Sony gave them. Capcom stated they were disappointed with their sales for SFV and had to lower (again) their sales expectations for future projects and even change how they develop games.

Street Fighter should have been multi-platform. SFV should have stayed in development longer and released when it was complete, not rushed to meet not only the Sony event reveal but some tournament (which I am still not convinced that was the reason).

All that, plus a lackluster roster, a piece meal, drip fed features, grind or pay for extras type of model and you have some of the worse decisions for a legendary game.

Not a shame at all that a better game sold better.

You mean the one where SF5 would never has been made.

It's called you being salty.

Sounds like it wasn't gonna happen without Sony SMH

Lol..SF5 never been made eh?

If you think Capcom had enough money to develop and publish SF5 when they couldn't even afford to port a game you my friend are the naive one.

When Bayonetta went to WiiU - Oh Nintendo saved it!

When ROTTR went to X1 - MS are publishing so that okay!

When SF5 goes to PS4 - Sony briebed them! Sony are evil!