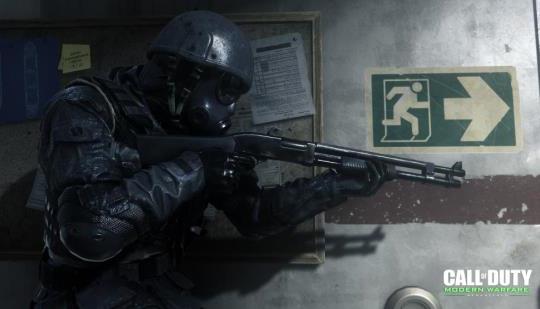 According to Raven Software, Modern Warfare Remastered will have an incredible leap in graphics fidelity whilst maintaining the gameplay experience fans have loved.

I mean, I should hope the graphics are a total leap forward. My memory of CoD: MW is really impressive looking, but YouTube videos beg to differ.

Yeah, it's been 9 years. I'm curious though as how the gameplay will be received, people tend to have nostalgia glasses but I'm not so sure it will amaze once again.

Yeah it's going to impress if this video is anything to go by..

Alexious was talking about the gameplay. That's not a video about gameplay. COD campaigns tend to have really dumb AI that just stand there and shoot. They'll take cover every now and then but most enemies act as targets in a shooting gallery. The shooting itself worked fine, I just always found it bland and unsatisfying just to shoot. Coupled with bad overall combat scenarios, it was never really compelling. Other games that do shooting better had an extra something going for them, either the feel of the gun, the smoothness of the controls (much more noticeable in 3rd person shooters, see Max Payne 3), or something along those lines.

The games were memorable for their spectacle, not the actual combat. I'd even put "All Ghillied Up" in the category of spectacle. It's not high octane, but the entire sequence and the setup was done beautifully, with crescendos and all. I think that might be the only part of the campaign that will actually hold up.

Yeah, but they really went to town if what we've seen is any indication. This isn't just a once-over with the HD brush, it's more like a total remake.

I mostly remember how much more fun it was witout a bazillion killstreaks. It felt balanced (though not every gun was). The handling of the guns also felt superb.

"I mean, I should hope the graphics are a total leap forward."

Well yeah, but most remasters can't be described that way, so I think they're doing a really great job on it.

We can hope. A better looking game is nice but it was made for a different graphical era.

The gameplay was golden but I hope balancing gets a good looking over. 3x grenade, blast radius damage of grenades nd martyrdom need some serious tweaking.

what was wrong with martyrdom? if you stay on the run and dont teabag the target you just killed, you should be allright.

But I'm a real Tetley kind of guy, so my teabag hangs around that bit extra to make up for its weak contents.

Martyrdom is crap for people that play hardcore. Can't count how many times that I was team killed by one.

This is how its gonna go, most people are gonna buy infinite warfare only for cod4.

Literally seen this comment a million times. It's not even related.

people want to buy remasters but are they against new upgrades for the consoles?

Most people are retards

Imagine they troll us and put in exo suits in the multiplayer.

I would cry so much

That would be hilarious to be honest. I'd love to read all the incessant complaints about it.

Indeed. Exo suits were fun at first, but ultimately they ruined the combat balance.

I would literally fight a higher up at Activision

I'll wait til it's on sale.

Just go all out on the remaster and I'll give you $50. I'm not buying the new call of duty just to play this though.

I think this one should be called a remake, when i hear remaster I think of a port similar to the PC version of the game.

get a gamer membership from best buy and then preorder the Legacy edition, there now you get two great games for a low price

Or don't spend any money on a membership, use Amazons free prime trial, pre order it (comes down to like 63.40 I believe) and remember to go into your account settings and cancel auto renewal.

Gcu is pretty cool, but if you can't pay 30 for a best buy sub, or 80 for the full year of amazon prime, then you should just use the free prime trial.

I am actually excited about this. i am going to get the game and turn in the newer one because all the new call of duty games suck to me. I hate the futuristic crap.

The only thing is that BO3 spoiled me on the unlimited run. I can't imagine going back to running 3 steps then stopping.

And with only half the maps!

Did they confirm if it'll be 60 fps like the original version?

I think it is safe to assume it is

Also, I really hope this years COD isn't full of frame drops and screen tearing like Ghosts was. That game ran horribly (although I really liked the rest of it).

Advanced Warfare sucked (hate the jetpack stuff) and I'm not a Black Ops 3 fan either with the wall running and jet pack jumping.

Why can't we have a game were we run around on the ground and can only jump a couple of feet?

It ran better on Xbox One. And ps3/360 were fine. They just didn't optimize it when they upped the res. But bo3 and Aw run fine so why wouldn't MWR and Infinite Warfare

liked the game...but i dont like this trend going in to past....this remasterd versions of games is proof that gaming industry dont whant to take risks...in other hand someone like cd projekt red using that pretty well trouh inovations and risk they will be on the top very long time...in pc gamnig...

the older versions of the COD / MW / BO series were the best, non of the stupid thrust jumping... only thing I hope they fixed is the hacking / modding and as always get rid of the quick / no scoping... its also a shame there wont be many people playing it due to how its being sold / not sold...

I enjoyed both the original on Xbox 360 and then the Wii Remote-aiming goodness of the Wii version!

For the single player, I hope they change the infinite AI spawning system. In MW2, you can clear the area of enemies even in the highest difficulty setting.

Agree 0Disagree 0
▼✖-+
SPAMInappropriate
Show all comments (42)
The story is too old to be commented.
150°Heating Up20