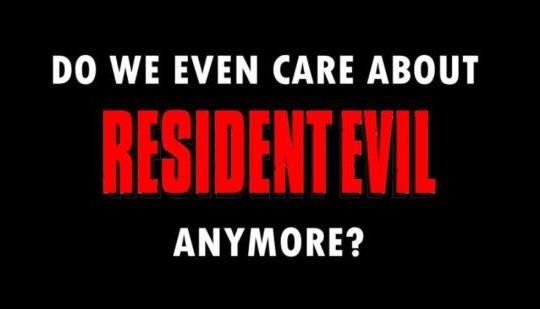 Do We Even Care About Resident Evil Anymore?

Resident Evil had its place in modern gaming, an acclaimed survival horror titan and Capcom’s most successful series which has now spanned for 20 years. But the series is dying and Capcom have tried so hard to revive the corpse that should be left to rot.

Since RE4 I stoped caring, it didn't feel like the ones before it and felt too much arcade for my taste and afterwards they became complete action games.

I care about the Resident Evil 2 remake...and I cared about the REmaster they released last year.

Talk about Resident Evil 2 Remake I hope capcon show gameplay (or a least terser) on E3 2016.

Last Resident Evil I enjoyed was Code Veronica on Dreamcast.
I tried RE4 when it came to PS2 but I stopped playing after 2 hours as I remember and since then I didn't care about the series anymore. It's been milked enough and I don't support any title with the same concept like Assassins Creed for example.
It's like whenever you visit a store or a gaming website you will find a new releases for that shit lol.

I lost my interest on RE because it has silly story that can't be tracked anymore, too much action and no more focus on horror gameplay/story, no possible way to end Whisker sex and the city drama anytime soon...seriously this title should have ended longtime ago.
Capcom really let me down on this series.

Yeah I think it's time to put resident evil to rest. It was good for its time but now it hasn't been able to remain relevant in years. Bury it.

Yes, still going to be waiting a long time on that Resident Evil Code Veronica Remake.

Capcom needs to find a way to evolve Resident Evil without sacrificing its identity. That is something that clearly became an issue with Resident Evil 4, 5, and even more blatant with 6. Removing the fixed camera angles, scarce ammunition and items, foreboding atmosphere,and puzzles and replacing them with explosions, tons of ammo, dual wielding, QTEs is not the way to go.

Instead of making Resident Evil Revelations for the RE Fans and the mainline games for casuals, they should really do it the other way around, or just put in a bunch of extra game modes like Mercenaries and Raid Mode for those who don't care about the story, or the challenge, so they can play a mode where they can run around and kill everything, and not infect the single player with those kinds of mechanics.

Maybe with RE7 we can have both Raid and Mercenaries mode for more replayability.

Yes indeed what a travesty 6 was. I noticed the decline on 5. The last great resident evil for me was 4. With my favorites being 1 and 3 because of nemesis.
I did enjoy operation raccoon city. More action oriented but since it was a side story about umbrellas mercenaries and soldiers it was acceptable. Raid modes and mercenaries is cool. But like you said if they brought back the true "survival horror" formula and cleaned up the story, and created some new zombie ideas for 7 maybe they can get back on top. But I dunno....capcom seems to have dried up entirely of what to do with this IP.

While Resident Evil 4 wasn't super scary, I think it's the best of the series. Removing the camera angles isn't the issue. Resident Evil 0 was a traditional Resident Evil and while a decent game, not scary at all.

"Capcom needs to find a way to evolve Resident Evil without sacrificing its identity." <---I agree with this statement, but let's not bring it back to tank controls and fixed camera angles. You're right though, there needs to be a balance with scarce ammo, good scares, and definitely bring back the puzzles but I think that can be accomplished in 3d don't you?

Personally I stopped caring after RE5. RE6 was just plain awful.

Yes we care, after the remake collection 0-4 is released I'll stop caring, about Capcom that is, done with them like I am done with Konami.

I still care. Resident Evil Revelations (only played on 3DS) was a breath of fresh air the franchise needed. I loved the first 4, I liked 5 and could not get into 6. So, I am not jumping off of the bandwagon quite yet.

I still play Umbrella and Darkside Chronicles on the PS3 using the brilliant and highly underrated PS Move sharp shooter. Which by the way I heard is making a well deserved come back (the gun not the game) with PS VR.

Back on topic, I am currently playing through Resident Evil Revelations 2, but have not decided yet if it's as good as the first yet. Bottom line, the series still has life for me. I'm also replaying Resident Evil 2 & 3 on the Vita, what can I say I guess I'm still a huge fan of the series.