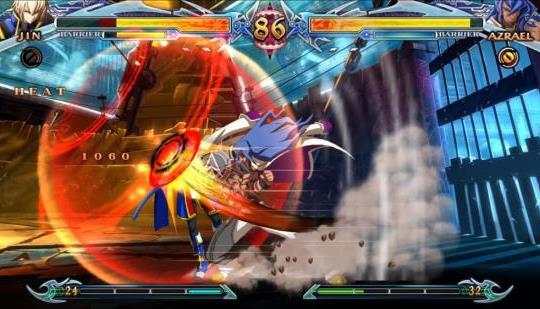 The current sad state of the BlazBlue franchise is an example of what happens when the fighting game market is oversaturated and fanbases are fractured.

I don't like multiple versions of games because that means if you want to play with new fighters, same way with racing games, you gotta drop money on a new game instead of updating the one they released already. Thankfully that won't be the case with SF V and Guilty Gear Xrd since they are just going to be updates for them rather than making it on another disc then releasing it again, including Mortal Kombat XL and Killer Instinct. Now this part i disagree with is fighting games being oversaturated!
it's called choices. Apparently this person never heard of it! fighting games can come in many different ways! they can 2d side scroll like SF, KOF, BlazBlue, Guilty Gear with characters that has cool abilities, 3D fighting games like DOA, Virtua Fighter and TEKKEN with realistic moves so no i wouldn't call this being oversaturated, it's a choice for ppl to make to what cater to their taste of brawlers they like.

Quick question though doesn't each game further the story? could they implement new stories as dlc possibly?

Guilty Gear did get that arcade update but they are kind of doing the same thing as BlazBlue. They do have the same developers after all.

Blazblue is probably my favorite fighting game, and knocked 3rd strike down a peg. When Continuum shift started releasing like it was Street Figther 2, I took a step back. I bought chrono phantasma on vita and it's online was even dead in a week.

Now it's just pointless to buy the vanilla versions of any of them. Bought CPE during the black friday sale for PS4. I'll probably wait for a sale before picking up central fiction EXTEND.

As a teenager growing up in the 90s, only fighting games offered us competitive gaming in the arcades and on the couch with our friends. Then the games industry changed and we all had way more games to choose from to get our competitive itch. For me the choice of fighting games is just right at the mo. However, I do believe releasing more than two versions of the same game in one generation is very damaging to that games community. I like the street fighter model going forward but Capcom still has much too learn, if they intend to release other games like this.

What's strange is I've just purchased this game. Never played a game from the series before but I've played a few arc systems games over the years. I bought the game for the single player action due to the content. Cost me the same as a couple of drinks in a pub from a second-hand shop.

I'm blown away by how strange but very cool this game is...

Blazblue is the better value.

The 11 Most Hilariously Bad Video Game Titles Of All Time

Up to 40% off on Mortal Kombat XL, Street Fighter V and other PS4/XB1 fighting games