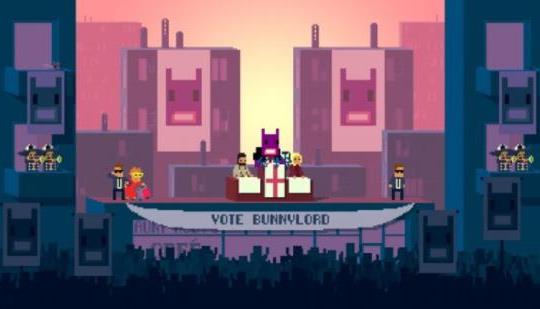 Hey Poor Player's Kevin Chapman writes - "Developer Roll7 has a particular knack when it comes to making frantic and challenging games. Their previous outing, the OlliOlli series, was a critical success that proved skateboarding games can still be fresh and fun even on modern systems. Their newest game, Not A Hero, takes things to a more familiar run-and-gun setting, for the most part anyway. The game starts out with a very simple premise: BunnyLord, a purple anthropomorphic rabbit from the future, wants to get elected as the city’s mayor. Things get rolling with a man named Steve being tasked by BunnyLord to up his approval rating and improve his chances of being elected. How is he supposed to accomplish this? Why, by brutally murdering the city’s criminals, thereby reducing crime and making people view BunnyLord favorably, of course. Sounds simple enough, right?"

I like the setup to the plot. Just a simple, macabre tale.

Not A Hero Available Now On Nintendo Switch

Not a Hero Review (The Gamers Lounge)

Gameplay for Every Free PlayStation Plus Game (February 2017)

February's Free PlayStation Plus Games Include LittleBigPlanet 3 on PS4

A new Donkey Kong Country is the game 2022 needs