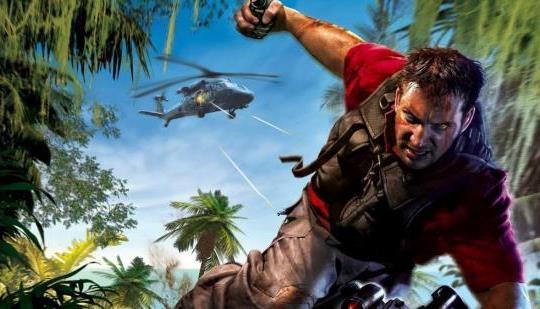 If you haven't been keeping up to date with Far Cry Primal's reviews, although many reviewers have nice comments to make about it, unfortunately, it isn't getting as much praise as recent titles in the series. However, 2006's Far Cry Vengeance will always (we hope) be the worst in the series.

Was Vengeance the one where you could mutate and go into beast mode? I hated that one. It's actually the only Far Cry game I didn't play through to completion.

Whenever they start promoting a new Far Cry game after Primal of course, it will be: "Far Cry is getting back to its roots."

We know its coming. It comes from every developer after these times. I'm not saying Primal is a flop. I'm sure it will sell some games. But look at what Ubisoft if doing with the Assassin's Creed series and now the Watch Dogs series.

When I thougt about it, Ubisoft games is a big part of my collection. I have alot of them to be honost: AC: Synidicate, Watch Dogs, AC: Black Flag, Far Cry 4, Trials Fusion, Child of Light, Valiant Hearts: The Great War, Grow Home, Zombie U, Rayman Legends (X1 & PS Vita).

I just think Ubisoft stepped back and saw that there on average 70 something ratings for most of there newer games, is having a hard time being in the same conversation with the big wig games on consoles now. The Witcher 3, Bloodborne, Fallout 4.....the list goes on.

Its hard putting a Ubisoft game title next to those and not relizing the huge differences between them.

I liked all the Ubisoft games I have. I think there good in there own way. But next to the big boys. Ubisoft has some work ahead of them.

I'd like to meet the guy that decided that taking away the players arsenal and vehicles was a good idea. They could've done so many things better with this game...really disappointed.
I was talking to a friend on PSN and we came up with a much better story. What if the game took place in 300BC instead, and centered around the Mayans? The aliens(I know this didn't really happen) that helped the Mayans build their temples and Pyramids could be annihilating the Mayans and it was up to a Mayan rebel to save his people. They could've had their ancient look with a more futuristic vibe as well. Imagine a game set in 300BC with alien weaponry...Sounds a lot better than what we got. Granted I'm only a handful of hours into the game, but I just don't see a game where I'm using sticks and a bow holding my attention for 20+ hours.

I couldn't agree more bud. My first thoughts when I first saw this game. Ubisoft liked throwing sticks and stones so much they made a game out of it. LOL. The story you have in mind would have deffinalty been more interesting than what they have now.

Don't be too sure that the Mayans didn't work with the Aliens though. You never know, right? LOL.

I just think with all the survival games coming out this year and early next year:

Far Cry Primal just didn't appeal to me compaired to these other games. I'm only going by videos online as well.

10 Games Worth Picking at the PlayStation Spring Sale