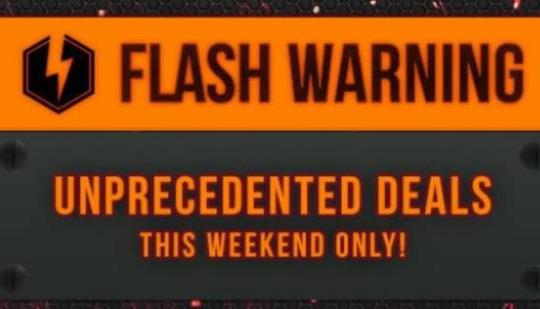 February 2016 PSN Flash Sale Is All About Valentine's Deals, Here's the Games on Sale

PSLS: Just like they did last year, Sony is holding a PlayStation Store Flash Sale on Valentine's weekend, saving you money on a wide variety of PlayStation 4, PlayStation 3, and PlayStation Vita games you can play with someone else.

Adhttps://store.steampowered.com/app/1488200/Symphony_of_War_The_Nephilim_Saga/?utm_source=n4g&utm_medium=native&utm_campaign=sow_n4g_native&utm_content=png
- Comments (84)+ Comments (84)
TopNewestOldest
Expand all
The story is too old to be commented.

Man they got some good deals.

Some good deals indeed, but for a Valentine's flash deal I would expect games like Catherine, FFX remastered and other games in those lines LOL!

Catherine is almost constantly on sale for $2-5 so it is surprising to not see it in the Vday flash sale.

Awesome flash sale deff picking up a few Vita titles this weekend at the very least. Any one can tell me if XBL have anything like this? I'm not being facetious I really wanna know. Thinking about getting an X1 again but budget and kids and stuff.

Awesome flash sale!! I just bought Divinity for my PS4 at 60% discount!! I had just the right amount in my account: $24.60. Lol. I had been waiting for that game to fall in price! Finally, I can play it.

FFX remastered would be most welcome! Nonetheless I picked up NBA Jam On Fire Edition. For $1.50 it's totally worth it.

Definitely getting Borderlands on Vita. Is my save data cross transferable from PS3/PS4?

Kind of non-angry ranted about PS+ below but The Order is exactly the type of game I'm talking about. A game like that - an exclusive that isn't selling anymore but is intriguing despite reviews - should be on PS+ by now. JMHO

The order was recently on sale for $10 and it's an awesome game but on the short side but for $10, that becomes less of an issue. It's also a pretty easy platinum besides some collectibles too.

agree with Nunley.... for $10, The Order was worth picking up and playing through.. I'd of been annoyed paying full price but happy to get it a bit cheaper

Wow! I was just going to buy monopoly the other day too. I'm jumping on that now! Same with Blue Estate. That demo was fun and I can't argue with $2.50

Hey man I just bought monopoly too. I can't play online cuz it keeps kicking me off! That sucks. Are you having problems too?

I haven't tried playing it online. I'm actually a bit mad at myself for not realizing it's a Ubisoft game. That explains all that they're trying to sell even after getting the game itself. I'll still play it though I suppose.

Yeah, shame it's not also in EU though-_-

With Knack being that Cheap, im betting its coming for free soon.

Nice..am finally buying that one now.

Yeah, that game is always on sale it seems like.

Yea thats a steal with all dlc and base game @20$

At this point, they can't even give it away! That should be telling right there. If I were on the fence I wouldn't touch the game. They'll probably shut the servers down soon

It's a great game (after all the patches), and they are still updating it so I can shut your theory down about turning servers off

no reason for shooter fans to not have it

it is smart of companies to try to squeeze out more sales at a discounted price rather than forget the game ever existed and keep selling at full price 4 years later(which limits sales because no one's going to pay full price on an old game)....looks at nintendo.

You're kidding right? I dont see one game on here thats worth buying at this point. Games like Knack should be offered free to PS+ users.

If someone has never played BF4 or Resogun, then those would be worth buying I guess...though they are quite old by now.

Yeah Resogun is great, I got the 'rambo' addon but it's been awhile maybe there's even more new content.

That's just you, you don't speak for everyone.

Nope, I don't speak for everyone. But I think most would agree that this sale is not "very impressive."

This generation of gamers is worse than what conservatives think of Bernie Sanders. You all want free games! "I demand free Indies, remasters and emulated games! Blah blah blah, free stuff". They are in the business of making money. They're not going to decide what games are free, and which aren't, just because YOU think they should be. Who are you?

Technically nothing on PS+ is free, as you are paying $50 annually over the course what is likely to be 7 or 8 years. Do that math, that's $350-$400. I think they could offer their less than stellar launch game, Knack, for free, instead of $8.

Not asking for handouts, just some measure of value from a service that - let's face it - thus far has been a bit underwhelming.

About your final comment below. You get games rated better than knack. Why are you obsessed with the fact that it has to be AAA? A good game is a good game regardless who makes it.

Because the majority of people want AAA games, not indies. I think we both know this to be this case.

Judging by the disagrees, I guess THERE IS something for me, YAY.

Thanks for the chuckles :)

Yeah, me neither. Oh well, at least other people get a few good games out of the sale. Plus there's always next month!

Usually digital sales on major titles on PSN don't really compare to just ordering the disc, but some of these prices are awesome. Diablo 3 Ultimate Evil Edition for $23 is the cheapest I've seen it anywhere for PS4.

unless you do not live in the U.S... for people outside the U.S. buying digitally from the us PSN during this sales is normally the cheapest option

Exactly, in Canada, PSN sales are a godsend! The no taxes + cheap sale prices are some of the best gaming deals available here and is the single reason my PS3 library is so large and varied. PSN sales have convinced me to try so many games I otherwise would have ignored as well.

Exactly. I am all over Diablo 3 finally. Definitely hasn't been that cheap for the Ultimate Edition yet.

Oh hell yeah. Is Divinity any good for couch co-op, is it pretty much the same or it more like Gauntlet?

@Eidolon - Divinity's combat is turn based, so it's not like either Diablo or Gauntlet. Should still be fun co-op though, if that sort of combat is fun for you and whoever you're playing with.

Under Defeat HD is good 2 player co-op if you're into SCHMUP's, have a PS3, and $2. Gauntlet is always a lot of fun as well if you want something on PS4.

Otherwise, most of the best offerings and games I see are on the PS3...or I already have them on the PS4.

I think the Idea behind the Valentines Day sale is to buy someone you love a game.
Then that person you bought the game for can ignore you for several days and tell you to "SHUT UP,..I'm tryn' to play my game!!! Geeeez!!!!!"
Love is grand.

Better than spending more to go to a movie for two hours where the two of you pretty much ignore each other for said two hours.

Well they said coop and multiplayer so obviously you and girl can play together on valentines.

Probably best time to have a flash sale, income tax return + Valentine's, some lonely people(or gamer couples) with a wad of cash to spend XD.

I brought a car with my tax refund....shoulda kept it for these flash sales.:(

Soul Sacrifice Delta on Vita is amazing. Grabbed that and defense grid for under 10 bucks. Deals galore.

Grabbed DG2 and BF4(sold my disc). I did not like Toukiden Kiwami and prefer Freedom Wars.. Is Soul Sacrifice better in terms of not being super grindy and repetitive as Toukiden/MH, I like variation of enemies and combat and dependence on skill, not gear.

I have not played Toukiden yet.

The combat in SSD feels so much fun to me that I didn't really find it grindy. Although you can really kite and survive against more powerful enemies.

On the other hand, I liked it way more than Freedom Wars.

Great, thanks, I'll buy it knowing it won't be free since I doubt they'd offer it twice even though Delta is new release/upgrade to SS.

Soul Sacrifice Delta for $7.19 is down right theft!

I say yes, but it could be free real soon .

I'm afraid of that, my backlog is huge, and don't want to think of the amount of money I'm probably losing by not playing the games I buy right away.

Yes, if you have a cousin/ little bro to play with, but as jznrpg said, it could be free for plus users soon. They always put games on flash sales before putting them on plus.

I'll just wait for it on PS Plus then. Thanks guys!

It should honestly be free at this point. It's begging and seems ready made to be a PS+ title so thus may be one last sales push before they give it away.

On the topic of PS+: I'm not one of those that think we should get a 3 month old, AAA title every month but I've been a subscriber since the beginning and they did toss a very solid, roughly year old AAA title to you every few months back in the beginning. I played Just Cause 2, RE5, Sleeping Dogs, the last Hitman and more because of PS+. It now seems like a generic "pay for online and we'll toss you some indies on top" subscription service. I'm not complaining but I'm not a big online gamer so I have it mainly for the perks and they simply aren't there for me like they used to be because I'm not a guy that games a ton so I'm not using that game time on "Castle Climb Enforcer Brigade" and whatever other generic platformer or clone of other successful indie title they throw at us.

I love any game that's fun so they haven't all been bad (!) but most are generic shovelware, IMO. I'm considering leaving PS+ behind when I run out this Summer. Not that I want to play Knack but it feels like it should have been free on PS+ by now. I can think of a few others that really scream "last gen this would be free by now". I just miss the surprise of that major release you had to pass on showing up in your mailbox as the new free title. I would have missed every game listed above and many more if not for PS+. I don't think I'd mind missing "Stick 'em" and the like.

I'm basically paying to not play online anyway so - again, for me - it IS about the games. You may feel different but Knack should have been tossed out and at least one title with the fame of Far Cry, Assassins Creed, Killzone, etc along with it in the last year. It went from a must have service for the benefits alone to a must have service because you literally have to have it and, oh yeah, here are some games that seem like every indie ever made outside of a select few.

what happened to AC: Black Flag??

Borderlands for vita 3.99$ and Sacred 3 Ps3 for me. Nothing on ps4 I want this particular sale, but there are flash sales all the time. NEVER MIND . Divinity Original Sin PS4 is real tempting at 23.99 , I guess I have to buy that too