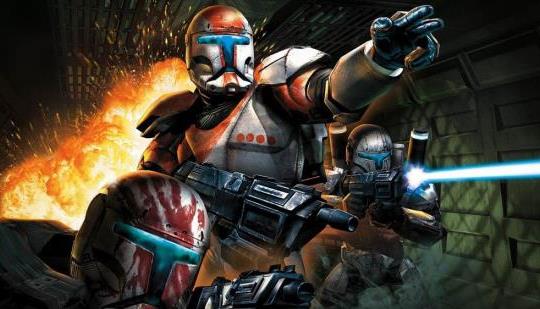 It looks like EA might make a Star Wars game that fans of a squad-based shooter from 2005 might like. If this leak is to be believed, EA is making a sequel to Star Wars: Republic Commando called Star Wars: Imperial Commando.

This comes from the Star Wars Leaks subreddit. A user going by the name Alpha_Cukie drops a wealth of information about the supposed Imperial Commando. Alpha_Cukie apparently gets his or her information from the fact that they are ” involved in the process of creating the ARG (Alternate Reality Game)” meant to accompany the announcement.

technobuffalo.com
Rumor: EA Making Sequel To Republic Commandogameranx.complsburydoughboy
- Comments (40)+ Comments (40)
TopNewestOldest
Expand all
The story is too old to be commented.

I can only imagine the amount of Microtransations and dlc this game will have.

I cant wait for the 50$ season pass reveal.

And it will be called Republic Commando EA.

Pre-order bonuses and cut content is going to be hilarious to see play out.

I really want a KOTOR3 from Bioware but it'll probably end up terrible somehow because..EA.

No man, KOTOR3 would be filled with Microtransactions to the core.

We are going to endure a long time of Mediocre Star Wars games with 50$ Season Pass and MT as long as EA is on the helm.

For some reason i imagine them making this game like Evolve, asymetry multiplayer with no story to speak of.

No faith in EA to deliver the goods for this game.

What reason is that when the rumor says it has 20+ hour campaign?

Dragon Age turned out to be pretty alright.
It's the mulitplayer that we should fear...

I know i'm walking into a big trap here. But if the game meets all of my standards, i can easily shell out 100$ for it.

I have been waiting so long for this (and Jedi knight).

I hope its fake. If it is real, expect a mysterious new female squad member and enough DLC to fill the deathstar.

I really hate Disney right now, first they sell the game license to EA, then they ruin the movie. What else can the possibly do to this once great franchise?

The movie was decent. They didn't ruin anything as far as the movie goes.

Ruined the movie? I am assuming by your name that you're trying to be unique by saying the opposite of mainstream thinking thats cool. It's like you time warped back to the 90's to be another lame sheep.

Lucas is a genius for creating such a vast intriguing universe, but at the same time destroys everything he touches solely. New Hope was a masterpiece written and directed by Lucas. Empire and Jedi, Lucas had others help with writing and directing. The remastered versions, headed solely by Lucas, made the movies worse. Now on to the Prequel trilogy, in my mind don't exist, sucked horribly. The writing, the acting (except Natalie Portman), everything about them were trash. Sure they looked pretty with modern day CGI, but the movies were garbage and gave Star Wars a bad name. Why were they bad? Just look at the credits...Written and Directed by George Lucas.

Disney actually gave Star Wars hope, new hope. I personally would put Force Awaken just below Empire and New Hope. The story and acting were incredible and didn't have some lame joke every 30 seconds. The prequel trilogy was so riddled with lame jokes I thought Ryan Reynolds wrote them.

The thing about the prequels is that they are really important to the time line and for me, that era is more exciting than the empire era (Actually the further you go back the more interesting it gets). So for me that makes it even more annoying how bad the prequels are. I loved them as a kid but since going through them again now it just makes me mad. Especially Anakin. The actor was one of the worst I've ever seen and he destroyed the character. Currently going through the clone wars series for the first time and Anakin is actually a really good and likeable character.

The movie was awesome! And they're stream lining the Canon too. I'm happy with what they're doing. As for the games, I really like battlefront. Gameplay is great and it's a really fun game to jump on and play with friends. Not to mention it sounds incredible and looks gorgeous. Having said that I wish EA were not the only ones allowed to make sw games.

I imagine the New Female entry will be force attuned overnight and invincible. God knows female protagonists can't show weakness like us males.

if sequel is canon then first game event is canon too ?

ps. can we get star wars legends game that set Yuuzhan Vong War ?

As much as I would love a new Republic Commando, I'm just not sure I want EA to do it.

it's already been ruined, lost interest

Come on.... this attitude is ridiculous. Can we at least wait to see if this is even real before we cast our ironclad decision that all is ruined. I understand their recent track record hasn't been stellar with Battlefront but they have put out good games beyond that. Garden Warfare is an example of EA being able to make a good game.

its been ruined cause Disney is killing all concepts not Canon , as for EA a screw up is expected .

I'm deeply concerned. It might be fake, but even if it's real, then EA will have to try EXTRA hard to make this game good. They rushed Battlefront out the door, so there's that to consider.

Secondly, does this make the first game canon? I'm pretty sure that Disney said that ALL Star Wars games were made non-canon...

I never played the original. Be interesting if they do announce it. My only problem is that while I feel battlefront was really good, I feel that if EA keep churning out sw games, we're gonna get some really poor titles soon. I wish sw games weren't exclusive to them. I'd love a naughty dog sw game! Now that would awesome!

If you thought Battlefront was great theres nothing for you to worry about, im sure whatever they throw at you youll love it.

@ninsigma this would only work if they weren't owned by Sony ......I'd love a naughty dog sw game! Now that would awesome! them being owned by sony makes that dream Void.

Oh I know it wouldn't work cuz of being Sony 1st party. I just think ND would make a great sw game.

A Naughty Dog SW game would be incredible. I've also been dying for a Sucker Punch developed Spider-Man game...that one could actually be a bit more feasible though considering Sony Pictures owns the license. Still really far fetched but Marvel needs to make moves to make their video gaming corner as compelling as DCs, and they need quality devs to create worthwhile experiences & Sucker Punch would be more qualified for a Spidey game than pretty much any other dev in existence.

Good call. I really like the sound of that. Do Sony own all entertainment rights excluding comics??

I know that Sony owns the film rights but Marvel still retains the print rights for the books & I believe the animation rights. I'm not sure if Sony owns the video game license or not but w/ the recent move towards Sony sharing Spider-Man's film license w/ Disney & Marvel proper, I could see a scenario where Marvel could strike a deal w/ Sony to give them the rights to an exclusive Spider-Man game to coincide w/ the next movie as a way to sweeten the deal. Marvel had recently hired a new guy to head up their game division & he was specifically talking about Rocksteady quality titles for the Marvel U. The TellTale game was announced shortly after that so it seems like they genuinely want to make a push back into gaming, and the best way to do that is to have the best devs to create the next games, and considering the connections between Marvel & Sony and the big market dominance for the ps4, it's at least a possibility!

Either way I would love to see some quality Marvel games, they've had brushes w/ greatness plenty of times in the past but they just need one Arkham level title and to bring back Marvel vs. Capcom, combine that with the TellTale game and I could see a day in the near future where Marvel is a big name in the gaming realm.

Sorry for the late reply. Only just noticed the comment xD

Yeah it would be great if something like that came out of their current partnership. I'm majorly happy that Sony are sharing the ip with marvel though I'm going to miss Andrew Garfield as Peter Parker.

It doesn't matter who makes the game as long as it's top quality. Spider man would be my favourite marvel character so to see a top notch game would be incredible.

I would definitely be open to a new Republic Commando game. I enjoyed the first one so why not, lets see what they come up with if real?

Republic commando was a mediocre game in itself. Wonder why you would make a sequel for it after so long.

yeah, and that's why it won't be made

Never played the original wouldn't know what to expect from a sequel, my only hopes is there is far more to offer than Battlefront has

The original was fun. This has potential! I just hope they're not going for simple cash grabs...

Honestly I hope it's fake, I enjoyed Republic Commando as much as the next Star Wars fan but do we really need ANOTHER Star Wars themed shooter? If they want to capitalize on the Star Wars license, go make KOTOR 3 or a new Jedi Knight/Academy game.

If you screw this one EA...

Screw anything by EA.