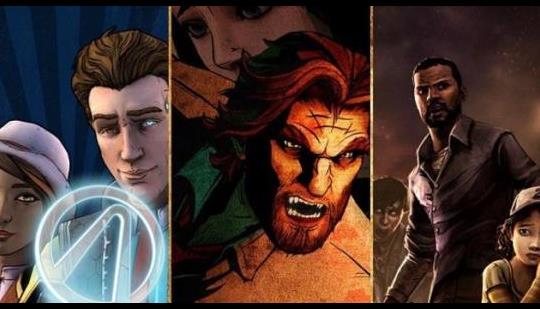 Tanner says, "Episodic content for video games is nothing new; even before we all learned who Telltale Games was in 2012, after their announcement of The Walking Dead, it was a thing. Heck, Telltale did it regularly before they became more widely known. But now three years later, this is all Telltale does; and they just keep pumping them out, two, three times a year. Frankly, I personally find it all annoying. Announcements of their next gigantic franchise they acquired rights to that they’re going to make a game for. And each game is, essentially the same thing in terms of game play. Every single one. Now, I’ve enjoyed both seasons of The Walking Dead, and The Wolf Among Us; their stories were great but, they’re all really the same game as the last one."

Unfortunately, they kind of have -- they've proven they can tell stories, but I feel like they need to take it to the next level gameplay-wise.

I personally still love their games and eagerly await the next. I can understand people becoming tired of these types of games but there are only a few episodic games that come out each year. I don't see why Telltale would have to make an adventure game or puzzle game when we already get several of those.

you're looking at them the wrong way, they play the same but they are by no means the same game.

Their game engine is the problem, it runs like crap.

I think each is different in their own right.

I do think a smoother engine is needed. Some of the episodes can be really scratchy.. like stop and play especially in the build up sequences and loading from chapter to chapter.

But I don't think the style or storytelling aspect is dying out at all. I mean Tales of Borderlands is one of the best ones yet and I also really liked the Game of Thrones season.

I mean just like any other game or developer they definitely are relying on a "tried and true" formula. I mean the saying goes "if it ain't broke, then don't fix it"

But at the same time they need to be like other games and developers and constantly strive for evolution and new heights.

In TWD season 2 I constantly had moments that froze for a couple of seconds, I love their games but an updated engine would do their games a great justice

If thats how they like doing stories and they enjoy doing it that way with the games they are contracted to do then so be it. My one issue is that they stop spreading themselves to thin so quality is lacking & delivery time of content does not become overwhelming long .

i love the idea of episodic games (in this adventure/story driven style), but they just take too long in between releases. if i knew the next episode would be out every 2 or 3 weeks, it would be great. but not knowing when, and having it take months doesnt work well.