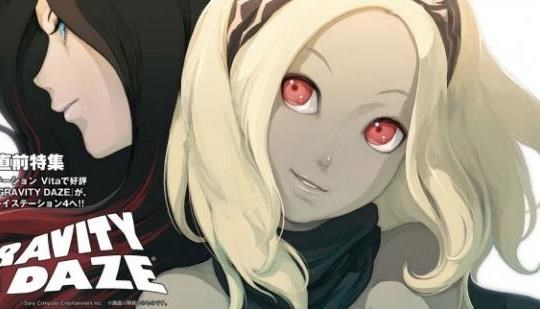 Gravity Rush Remastered, released a few days ago in Japan and coming to the west on February 2nd, was supposed to be launched as a digital download only on the PlayStation Store in North America, but Sony Computer Entertainment changed its mind halfway through, and is now offering a physical disk for the game. Keiichiro Toyama explained why.

That is great news.

Super cool news, Already have the platinum for the Vita Version, guess I'm going to have to double dip and get it again for the Ps4 (the game and the platinum XD)

Same here, this game is actually worth playing twice... really looking forward to experience the gravity bending on a big screen.

Only on PlayStation.
That is the power of the PlayStation Nation in motion.

"let's put another shrimp on the barbie "

Seriously, that is what i think every single damn i see your profile picture lol.

Will be getting physical copy, yay

When fans are vocal enough, they can get what they want from corporations

Not if its Nintendo (primarily referring to of America)

I mean...not really. I don't think this is due to the comments so much as the volume of comments. They are likely doing this because they projected a physical release as still giving them a deep profit. Pretty sure of the numbers didn't support it, they would not be putting out a physical release of this game.

Consider I'm sure someone where, some fan is asking for some of Sony's digital games to have retail releases ie Entwined, Resogun, The Unfinished Swan etc.

Of course its the volume of the comments...If 50,000 people ask for something its going to make people consider it more then if 5000 ask for it

@Smearg- not really. Many have made comments regarding Yakuza 5 not having a physical release.....

That doesn't mean SEGA is going to do it. The comment isn't why they are doing it, the AMOUNT of comments might be.

Consider other games exist right now by Sony with no retail release.

I mean...do you think that they are just doing this JUST based on asking? Never mind how many? LMFAO! Bud.....no. That is very, very doubtful.

They are not doing this because someone asked, they are doing it because a huge amount asked that likely deemed it affordable for a physical release.

Many still ask for physical releases of games, I don't think Sony is doing this based on merely asking, the reality is.....many have asked for other Sony games to have retail releases that actually never got retail releases. The volume of those asking warrants the retail release, not the asking in general.

If Sega dont listen, how will they listen to you? You know, so they can listen.

Damn... you blazed him lol

They did not listen us, who expected Gravity Rush for the PS Vita though.

Mind you Yakuza 5 and Zero are listen to western fans, I'm happy we are getting them at all, regardless of format.

Thanks for listening Sony

Kat deserves a PS4 release for the first game.

I prefer physical over digital any day, its just great.to have a collection

Great news! Im not a fan of digital only games regardless if they fully install..

So Gravity Rush, Gravity Daze and 2 Yakuza games.... but but Sony has no Gamezzzzz.... /s

Agree 0Disagree 0
▼✖-+
SPAMInappropriate
Show all comments (33)
The story is too old to be commented.
50°