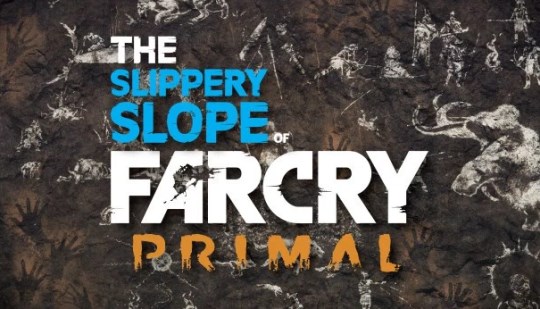 GTFO with this BS.

Have I ever told you the definition...of insanity?

I tried to listen to you, but I was preoccupied with being thrown off a cliff... tied to a large rock.

To the author, after reading the article I get what you're trying to say, but the opening paragraph that's previewed here is horrible.

Basically what I got out of it is a concern about how the native race is portrayed in Primal, and it's a valid concern. Culture has been a very strong aspect of the past games, specially far cry 4. I really loved the integration of Nepalese culture and parallel mythology.

It would be a bold move to ditch English and go straight for a native language, which would be extremely improbably considering what language would be suitable and where they'll find voice actors for it. All past games have had English as the primary language, keeping it strictly native is just an unnecessary risk they will not take.

My guess is it'll be a mix of English and some form of native dialect either made up or reflective of something similar.

Garbage, hate, and drivel... Seriously, how do people like this function day to day with so much speculation and looking for the bad in everything as apposed to the good. If I was in a situation where I needed help and someone came to help me whether he is an affluent white guy or a broke black/brown/blue/purple guy it wouldn't matter. Nothing in FarCry 3 or 4 was racist. There was no "because your not white you CANT do this or that." Not to mention its telling a story and to say that just because the person is a different color and he saves people is not okay... that's a messed up world view. I mean do you really hate on doctors without borders if they are white doctors who happen to travel to a place to save non white people because they would just be "white saviors." I hope you choke on your own self righteous smugness. If a games plot offends you because the character is a rich spoiled white kid who learns and grows to be something more than that, you obviously have some social and global viewpoints that are messed up.

A little more on the main point of your article...

Please without speculation do tell us all what language a tribe 10,000 years ago did speak?

Also, do tell me how you grew up to hate all your childhood stories because they weren't told to you in the language they were written in. I mean seriously heaven forbid someone translate a story into your language... or lets be honest this story was either written in english or french so the story is still accurate. You know because its a story and NOT REAL!

"In 10,000 BC, tribal nations did not speak English"
Really!!!
what a great discovery
Can you please tell us what language did they speak?

This article is a far cry from a good read

10 Games Worth Picking at the PlayStation Spring Sale

Every main Far Cry game ranked from worst to best

Amazon Ubisoft Digital Game Sale On Xbox One: Up To 80%

Watch Dogs 2, Ghost Recon Wildlands, and Far Cry Primal are $5 each on the Epic Games Store