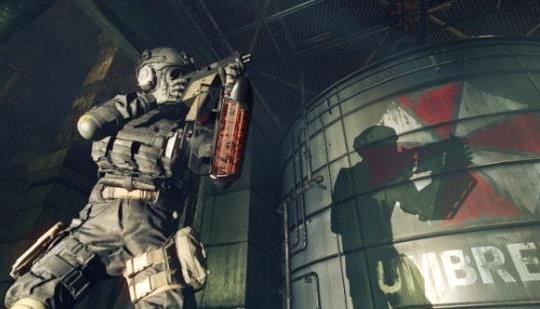 Resident Evil: Umbrella Corps could be a good budget shooter I Geek

Capcom’s latest Resident Evil title, Umbrella Corps, is a third-person team-based spinoff that takes place after Resident Evil 6 — even though the antagonistic Umbrella company that used to be central to the franchise is dead at this point in the ridiculous series timeline. Nevertheless, Capcom showed off an action-packed trailer at its World of Capcom panel at New York Comic Con.

Adhttps://store.steampowered.com/app/1488200/Symphony_of_War_The_Nephilim_Saga/?utm_source=n4g&utm_medium=native&utm_campaign=sow_n4g_native&utm_content=png
- Comments (19)+ Comments (19)
TopNewestOldest
The story is too old to be commented.

Well, unlike Evolve/Titanfall and all those MP only shooters, this one is priced right.

And the mechanics looks fresh and fast paced so that will definitely make it stand out.

I still wish they would have gone with Outbreak File 3.

Have you seen ANY videos of this game? It's the most generic cookie cutter shooter there is. Nothing about this stands out aside from Resident Evil in the name.

I am generally talking about the mechanics my friend not the environment/atmosphere etc etc. Yes, it does look generic but some of the mechanics looks interesting. And we surely havent seen everything.

^^^ I hope for the game's case you're right, it's going to take more than the Resident Evil name for it to enjoy any sort of success in such a saturated market.

Not proud of this fact, but i'll prolly buy this, A FPS resident evil is kinda unique right? gotta add it to the collection.

If it's online only and you are getting half a game then it should be 30$.

Looking at you R6 siege.

Is a single player-only game considered half a game?

If a multiplayer only game dies out then you're left shooting at walls if it doesn't get shut down(EA). That's not a problem with single player only games.

?? Nope. Each game has a value all its own bud. That is like saying fighting games should be half price because they are not RPGs or something.

Witcher 3 should be half price guys, it doesn't have multiplayer. /s

OH should they be half price too?

As someone who plays both MP and SP....no, hell no that makes no sense. Mind you, I had zero problem paying FULL PRICE for the BF series years ago before they added a single player. The single player is STILL of no value to ME as I play BF for its MP, I literally never even start a SP game in those games as I'm not buying it for that, its about MP for me and I'll gladly pay $60 for that experience.

JUST like I'll gladly pay $60 for Until Dawn or The Witcher 3 etc.

I'm paying for what it is, not what I want it to be or for its number of modes etc.

An no I am not referring to single player games that have a full feature list. I am referring to half baked online only games that should have shipped with more content.

ITS Not ok for companies to sell unfisinhed products period.

"ITS Not ok for companies to sell unfisinhed products"

How do you know what is finished and what is "unfinished" that doesn't really make much sense as the product being made for sale is by what Ubisoft deems it to be.

You either choose to buy it.....or not. What it launches with is what it launches with, unless you had content IN YOUR GAME AFTER RELEASE removed, you have zero claim of "unfinished" as what Rainbow Six Siege is as a product is a MP only game.

What your stating in terms of your own little definition of "unfinished" can apply to every game ever made as MOST games have content removed based on design reasons, limitations etc. No game just launches with 100% all ideas that where made day 1 LMFAO!

Soooooo by your logic zero game is actually finished as...have you heard what Conker was originally going to be?

Your stating a product as "finished" based on content that was clearly not going to see the final game based on the publisher seeking to use its funds elsewhere as this game's MP mode also has free maps for the rest of the titles support life.

What it is...is what the publisher deems it to be...NOT YOU, you can't now state its um "unfinished" unless you some how own the damn game's IP and copyright and are stating its not ready for release or something lol.

Stand back guys, Terminator 1 is "unfinished" because I found some deleted scenes....man bro!

When a game is released...its finished....thats it. You can't state something is "unfinished" based on what happens in development as that just makes zero sense, your basically crying for something you don't even know the length, quality etc of. Thus...your crying and whining AFTER THE FACT, as if to state if you never heard of the single player getting canned, you clearly would not be stating "unfinished" how many damn games do you think scrap content based on being inferior? So is every game unfinished by your stupid, childish logic?

Bud...grow up, either buy it or don't, your logic can apply to all games released and that have ever released with content that was removed due to design. Your angry based on new found knowledge, seems like you would have been happier never knowing it existed as folks like you love to live in ignorance.

You are only owed the product advertised, nothing more. Your buying the game that releases, not what you some how want the team to release, you don't own the team, publisher etc and they have no ode to add something that is now not in the game....you really need to grow up a bit and really understand what your actual rights are bud, you don't own the team and where never promised everything they placed their hands on.

while I do agree you have the choice of buying it or not and the game ships as intended, does that mean we as consumers have to sit back and get more and more content stripped from us only for it to be sold later on?

I mean come on grow up when do we draw the line as far as stripped down games?

Idk why you brought up conker as that was before paid DLC was implemented.

I understand your argument about you get what you get and it's not up to you to decide what's in the product but really bro? Haven't you ever been pissed when you thought something should have been included in the game in the first place you had to buy? Ever??

But yes ultimately it's consumer choice whether to buy or not. Can you not agree that it's not right for developers to constantly strip games down only to sell it to us later?

Stripped? when was it yours exactly? What was taken from the final game that you actually physically had?

Its hard to claim something thing is um 'stripped" of something you DON'T OWN THE RIGHTS TO!

You don't own the team, the publisher, the IP etc.

"Haven't you ever been pissed when you thought something should have been included in the game in the first place you had to buy? Ever??"

? Nope. Because when I buy a game, I under the full understanding that I'm buying a product that was advertised, not what I "think" it should be included with it.

Bud enough, you can cry about that about any game, at the end of the day, did they promise it to you? Was it advertised to actually be in the product your buying? Is it on the box that it includes such content? Do you not fully understand that your buying THEIR product?

"Can you not agree that it's not right for developers to constantly strip games down only to sell it to us later?"

Nope, as its not your actual game bud, its theirs, the decide what they want in their final product and even if it was something that was suppose to come in the final game that they changed their mind on and released as DLC....that is for them to actually decide and that is something they have the right to do. Bud...the entitlement, when does that go too far with assumptions of what a game should or shouldn't have in it?

I mean...are you not agreeing to buy said product as promoted? When on earth did this become some collaborative effort consumer to artist? Its not your damn work, company, project etc.

So the concept of something being "striped" makes zero sense as unless it was in your hands and you played it then one day it wasn't...you don't have much claim over such a thing.

If I write a book and decide that during this process I'm going to make a series of books instead and near the ending I add that part to the beginning of the second book....

How did I "strip" something from you that never was yours to begin with? Its MY WORK..NOT YOURS, your merely seeking to buy what you know as Book 1, I know that book 2 has some of what was in Book 1 originally.

Your buying what I'm making CURRENTLY, not what I was originally going to do, that has nothing to do with the final product and the final book is what I decide, not you, the same goes for ALL mediums. Your again buying what is currently being marketed, not what you want it to be or content you think "should" be in it.

I mean...you can't take such a childish claim to court bud, I've heard this cry by many on here about DLC and the reality is....do you even have a case on a product that you don't own? Where did they state your buying the teams work and everything they put their hands on?

Can you not state this about books, film, art, music? I mean seriously, its entitled and your assuming you have some right to content you didn't pay for and have no legal right over. Why is it you don't see this in film, shows, books, music? Yet...in gaming some concept exist where someone feels they are owed pretty much everything that isn't nailed down to the studio lol.

If you have a real legal reason why your owned something like that, I would love to hear it, but I've never heard on any site, forum anywhere anything that gives consumers such a strange right.

You have the right to received what was promised and what was marketed. NOT everything the team was working on.

Films studios make behind the scenes

An extra is an extra, no matter how it was created, you have no right to it and they have no ode to some how give hand outs for free just because.

If you have some right to content thats not yours...might as well say this for the rest of those mediums too bud.

I love RE but, This game is truly a pile of sh*te!

I can see myself paying $30 for this, If price goes up, I don't see myself buying. Price is the biggest issue I have with some of these new multiplayer only games. Evolve, Titanfall, Battlefront, Rainbow Six: Siege all want $60 for a game that is online multiplayer only, with no story/campaign offline mode, meaning in a year it could be a very expensive paperweight.

US PlayStation Store Gets Resident Evil Sale This Week