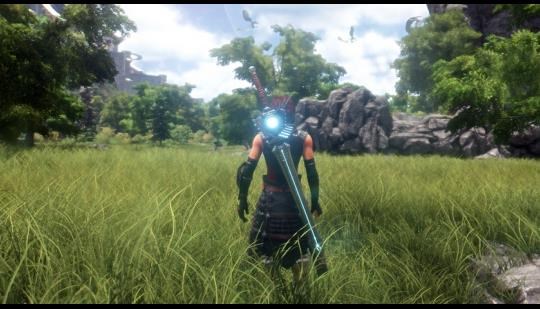 One Angry Gamer "The Kickstarted project that aims to bring a JRPG-influenced role-playing game to PC, PS4 and Xbox One platforms has just received some brand new screenshots. Midgar Studios unveiled two new in-game shots of the role-playing title and the graphics are looking more and more impressive each time a new set of shots are showcased."

Any word on the gameplay though?

It's very basic so far. Kinda cliche and boring right now. I like the quick time events when he goes to punch the enemies though. Hope it expands to more weapons for brawlers and fighter types.

Looks to be a really outdated video compared of what they showed recently, if i've correctly heard there is some mix of atb turn battles and tactical with movement and decor interactions, the best thing to do is to wait for the next gameplay video.

Looks tons better than what it previously looked like. They should just tweak the faces a bit.

Whats that in the distance a freakin dragon at this point its like fps has bullets fantasy has dragons lol some of these devs need to get a little more creative ... I know a two headed dragon wow. Will give it a go though as some turn based games are not too shaby.

Stop smoking drugs. This is nothing like a fps. WTF

He's saying sticking dragons into fantasy games is kinda generic at this point, about as generic as having bullets in an FPS game.

Name all the games released in the last 5 years where you fight dragons.

I'd love to know as I don't think there are enough dragons you can fight in games, I love fighting them.

They are not dragons, they are giant birds ^_^

I think it's you that need to exercise your creativity a little if you see a winged creature and instantly think "dragon".

Yeah I agree I need to be more creative , oh look a dragon.

Story changes based on the choice you make??? Cearly these guys didn't understand JRPGs...

What do you mean?

He means that JRPGs typically do not have branching narratives.

Choices informing the story are the hallmark of a WRPG, not a JRPG.

JRPGs typically have fewer choices but it allows for a more tightly driven narrative with better momentum than most WRPGs.

In contrast most WRPGs simply saddle you with a premise but without narrative urgency. This is done so that all the choices and sub-stories they lead to can be better compartmentalised as individual episodes that don't have much impact on the overarching narrative.

After all, designing a game where hundreds of choices each have an individual impact on the overarching narrative would be logistically insane (though I've heard people say Alpha Protocol comes close).

That's not to say choice doesn't exist in JRPGs, but it's a different kind of choice, made from player compromise (Persona 3/4 are have loads of this. There simply isn't time to do everything) rather than spurned on by player autonomy/freedom.

It's not as if one style is better than the other, but the non-branching story path is typically preferred by JRPG players because when done right it makes for excellent, non-stop pacing. FFX and Chrono Trigger being strong examples of relatively short JRPGs that maximise narrative use of their screen time.

I think the "JRPG" influence is going to be coming more from the battle system that seems to be a mixture of several different hallmark JRPGs. Most notably, I think, is the fact that it seems to borrow the IP gauge from Grandia and the timed-attacks from games like Lost Odyssey and Super Mario RPG.

Like someone said below, the game is clearly a mix between JRPG (for battle aspect) and WRPG (for narrative aspect) i think it's clearly something really complicated for indies to do high quality cutscene / cinematics like in classic JRPGs so by going full text narrative and choice based like in WRPG like The Witcher they can have something pretty cool and original and keeping the battle system of old school JRPGs

Ill keep my eye on this it may be one of the few multi that I buy.

Proud Kickstarter backer. I have liked everything I've seen so far and each update has been good!

Not sure about having qte for normal attacks in a turn based rpg. Although it could be just for a critical hit or something. I dunno, just looks odd to me.

I imagine it being like Legend of Dragoon, Mario RPGs, and FF8's trigger attacks.

I think it maybe like how LOD did it.

Never played that before. We're those button hits necessary for the attack to work or were they for dealing extra damage??

Interesting. Thanks to both of you!

They were for extra damage.

Holy F..Yasunori Mistuda is the composer! This has to be made. He's extremely good at bringing out some of the most emotional musical provocations for a video game story. He's right up there with Nobou Uematsu. If anything he's easily the second best musical composer in video game history right behind Nobou.

I wish someone would make a game that implemented the battle system of Legend of Legaia. One of the best battle systems ever.

Review: Edge of Eternity on PS4 is a proficient RPG with an interesting combat system - Entertainium