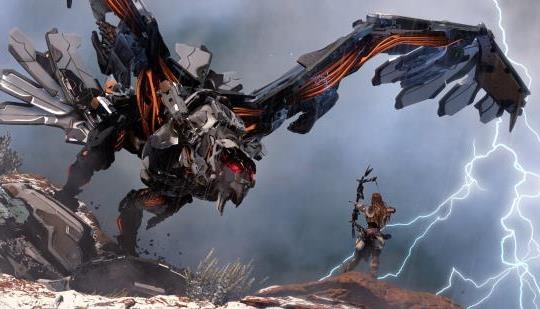 For the last 11 years, Dutch developer Guerrilla Games has been crafting future war shooting galleries with the Killzone series, but now, with Horizon: Zero Dawn, the studio is branching out into the unknown. Guns have been dropped, a new heroine (with a splash of Ygritte and Ripley) is in the lead role and team members from CD Projekt RED and Bethesda have been brought in to help craft the action-RPG. In the latest issue of Official PlayStation Magazine, Guerrilla MD and co-founder Hermen Hulst discusses what's involved when a shooter-friendly studio takes on a brand new genre.

good read - but , HH is careful not to give away any new info

Best-looking new IP of the generation.

Can this game possibly be more perfect?

right now, i don't see how it could be more perfect. and intrigue? how about fending off robotic dinos with NO GUNS??? if that isn't intriguing, i don't know what is!

'What I like about these enemies is that there is plenty of opportunity for a lot of variety and a lot of depth in the gameplay. '
This :)