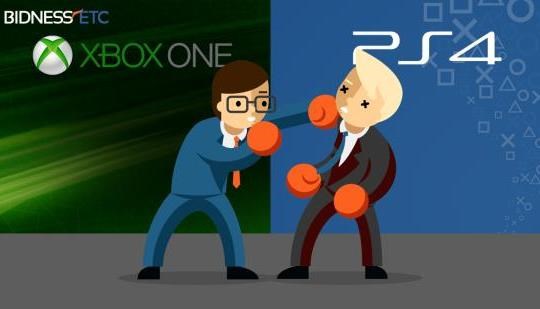 What Microsoft Xbox One Needs To Do To Beat Sony PlayStation 4?

If you've been following the console wars of this generation, then you're already familiar with the on-going rivalry between Sony Corporation’s PlayStation 4 and Microsoft Corporation’s Xbox One. A rivalry that has been going on since the fifth generation of consoles. However, it seems Sony has left Microsoft in the dust and raced ahead by selling the most consoles with its PlayStation 4.

Xbox One will not outsell the PS4 at the end of this generation. The 'problem' for Microsoft is that PS4 has too much dominance in Japan and continental Europe where the Playstation brand has always done well. However, it's about 50/50 on who will end up selling more in North America by the end of this gen for me as it could swing either way. However, hardware sales aren't very important because both companies make their money from online subscriptions and software purchases so as long as both sell decently (which they both currently are) both companies will make a profit because most of their profit comes after the box is in your house. Release good exclusive games, features and support your fans and both Consoles will do well, regardless of who sells more.

Xbox is losing in every country in the world, so it's too late for Microsoft to turn anything around and with PS4 selling nearly triple the amount of Xbox one's they have no chance. The Playstation brand's name alone just sells itself and with 3rd party games better on PS4, Xbox has no chance.

tripling ... ? you wanna do better research

bruh microsoft is killing it in their own lane, they know they tripped in the beginning which is why sony got such a lead but the tango is different now.

its funny seeing these people bring up numbers and international stats too, wheres a pc elitist to quiet these fanboys when u need em?

both are making great games, lets focus on what's important.

This article has nothing to do with what they can do. It even says that they wont. It just gives us a history lesson of the xbone's launch. Wtf!

There's a lot of features on xbox that are only available to America. I think that will boost its sales in the region in comparison to other regions that dont have them.

As long as they keep pumping out all these games, I'm good for this generation. I like underdog Microsoft better. Especially with Phil Spencer at the helm. I have both an Xbox One and a PS4 and in my humble opinion Xbox One is a clear choice in terms of quality games out right now. However, it is still early and we still need to see the PS4's big guns. We will see.

Don't worry about beating Sony and work on your image, appeal and catering to all your fan bases :|

I agree. They should not focus on that too much, but you know they will to a certain extent since Sony is a competitor. Underdog Microsoft is better for the fans. Look at all the games they are pumping out and fan services. It's refreshing to see. Just my opinion.

They are catering to their fans, since leadership change Xbox honestly haas never looked better to me.
Going back to work soon, and get an xbox, I have to play crackdown, quantum break, and scalbound.
We got so many great games coming, I m just happy.

Exactly! It's a more appealing package nowadays with some great games just around the corner. I can't see it outselling ps4 but if the owners of xbox 1 are happy then that's all that matters.

The only hope to beat the PS4 is in the US where things haven't gotten too far out of hand sales gap wise.

Just as long as I keep getting great games, I couldn't care less about the Xbox beating the ps4.

wont happen ps4 already ahead of the pack this must be the 6th negative article in 1 week if xbox one going to out sell ps4 sorry but these articles need to stop coming. looking for hits

What Microsoft needs to do is improve the image of the Xbox brand (which they are doing) and come out swinging with the next generation of systens.

As for closing the gap of 12 million systems and surpassing Sony. That won't happen nor should they spend their whole budget trying to accomplish that.

Hopefully Microsofts learns that having a great first impression is key to having great sales at launch. Plus the brand image will help maintain those sales in the long run.

Why does the Xbox One have to beat the PS4? It seems to be doing okay and many gamers enjoy it.
I don't remember too many articles last gen about what the PS3 is supposed to do to beat the 360.
Be a gamer, don't be a fanboy.

just ignore crap like this. Why does it even get approved? lol

Same reason why articles that bash Sony due to a lack of a Gamescom conference.

I doubt any real gamer would approve articles like this.

Microsoft is dominating Sony this gen where it really matters... PLATFORM.

People that naysay Ms are always BACKWARDS, such as saying that Ms is the worst for gaming while those opposing them are, as we see with how much needed DRM with always online will be, while those with Sony disc DRM will be "alienated", as they have to "phone home" (an E.T. reference for those too young to know) to ask for a disc swap to remotely play anywhere, as Windows or Xbox is building into supporting, in the inevitable trend of streaming directly from home consoles, rather than expensive rental services, such as PS Now.

I suppose the problem is that "Ms" naysayers are fLAMER in how they're just too casual and sheeple about tech to realize how they repeat trendy *BS*.

All the improvements and features Ms is deploying now will move to a faster Xbox practically overnight... I doubt Ms spends over a week getting everything from the current Xbox to work on a faster "one"... BC, streaming, CrossTech, Cortana, Universal Apps, VR integration, media functionality... all of it will easily transfer to an upcoming improved Xbox (sort of like how Windows 10 is the same "gen" forever), while older Xbox owners will likely have "forwards" compatibility with new games on "9th gen" to lessen the pain of Ms updating hardware more rapidly, plus then the last gen XO will get most of the same updates.

Sony has lost, they just don't know it yet, though I don't expect any Sony fans to believe that, even though we're beginning to see how that's actually starting to come true.