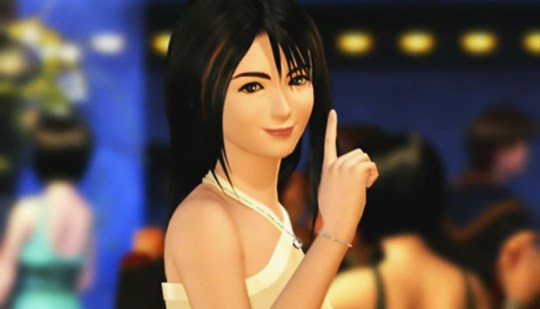 VICE: Ask someone who's not seen one for several years to describe an average video game and chances are there'll be guns, explosions and non-stop action involved. It's an understandable conclusion to come to: watch any sitcom or movie scene in which someone plays a game and you'll see them frantically jabbing away at a nondescript controller while bleepy-bloopy sound effects from the '80s ring out.

As any regular gamer will tell you, though, whatever their platform of preference or dedication to the cause, the world of video games offers a hell of a lot more than mindless shooty-bang-bang action. For decades this constantly growing medium has also delivered some truly memorable moments that stick with us long after the credits have rolled. Here are some of the most beautiful moments – some visually stunning, some heartwarming – in gaming history. SPOILERS AHEAD.

That dance scene on Final Fantasy 8 was so anti-Squall it sickened me.

But it did establish how awkward he was and how despite not "wanting" to dance he then started to enjoy it. You know until Rinoa saw Cid and walked away from him. His face then drops and I'm guessing is reminded of why he doesn't let anyone in....because they end up leaving him like his mother, father, friends and Ellone, the last person he trusted.

Finally, someone who understands Squall! :D I have been a fan of the character since the release of the game but many consider him whiny, emo and arrogant. It is as if many people are unable to comprehend complex emotions and feelings. They only want rugged, tough and angry cardboard male characters.

How about a spoiler warning buddy?. Nice consideration. I don't care how old the game is so don't use that as an excuse.

Shame no one else does.

Like I've said, best character development in a FF game. It gives you a reason why he's like that, it's explained to you. But people just judge him by who he is at the start of the game

Sorry but I am

It's been out for years with the ending being talked about all over the internet especially on N4G (the top 10 lists and that).

How you've managed to get to 2015 and not have it spoilt for you before me is unreal.

That's not a spoiler at all. A spoiler would be like him saying that all the games party members were orphans together as children and the orphanage matron sacrificed herself by allowing a time traveling sorceress to possess her in order to protect the children, then setting in motion a chain of events with her husband to erect an academy of sorts with the purpose of training soldiers to eventually kill her when the sorceress eventually regains full strength and threatens the world once again.

@-Foxtrot
Even you must admit that they dancing the same choreography as everyone else is at least a little over the top. Or should we believe that Squall actually took dance lessons?

For me one of the biggest problems about FFVIII is that many things are visually beautiful, but when you really think about them, they're silly. This dance scene is one example, everybody dancing together is beautiful, but it just doesn't fit Squall character. Squall saving Rinoa in space is a beautiful scene, but the whole "space adventure" part was silly. Seeing Squall getting stabbed in the chest in the end of disc 1 was visually shocking, but its lack of consequences (the only acknowledgment of it is Squall saying "my wound... no wound?") makes that part unnecessary and over the top. Even the opening is really beautiful to watch, but the way it was put together it's much more like a trailer than an opening.

But if I added that then I'd be spoiling it, dont you think?

I could do that to every FF game to pick out their flaws.

" Even you must admit that they dancing the same choreography as everyone else is at least a little over the top. Or should we believe that Squall actually took dance lessons? "

I don't think it's over the top. Considering its mentioned the Garden has those graduation dances every year, it's entirely possible the students have to take dance lessons for that exact reason. It would also come in handy if they are ever on a mission that required them to dance or at least know how to act amongst dignitaries/politicians at a ball or gala.

What's more unbelievable is that every member of the party knew how to not only play a musical instrument, but to expertly replicate Eyes on Me for Squall and Rinoa's date. But I'm willing to look past that because it's such a pretty scene....and who knows, maybe Balamb Garden has really good music lessons too? lol

recently, the first part of Life Is Strange Episode 4 was pretty amazing

Life is Strange has a lot of those moments where you can just stop and look at the scenery while hearing relaxing music.

That dance scene is so beautiful IMO

gonna say it again. ff8 was so under-rated. if people only got over the draw system, they would have enjoyed a beautiful game. but it was always going to be difficult after ff7's success.

Agreed, I hope the game gets remade too.

Loved the part in ME3 when Shep and Garrus go settle the best shot debate on the Citadel and you get the option to miss on purpose :)

Prince of Persia's most memorable moment:
To unleashed the devil (after going through hell to contain it) just so the Prince (I, the player) can save Elika in the end ... unexpected and touching.

15 Underrated FPS Games You May Want to Try