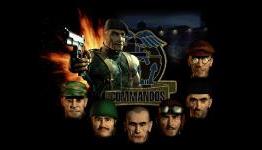 Someone Wants To Bring Back Commandos via Sketchy Kickstarter Campaign

Marcus Estrada writes: "The Commandos series is pretty darn excellent. Starting with Commandos: Behind Enemy Lines in 1998 and followed by two numbered sequels, these tactical stealth games drew a huge fanbase. It only makes sense that folks would want to recapture the fun of playing with a brand new Commandos experience. Some developers have attempted as much by creating their own new franchises. Unfortunately, that's not what the person running a Kickstarter titled "Commandos PC Game - REBOOT" is doing. Instead, they're hoping to capitalize off Pyro Studios' existing brand 100%."

Weekend PC Deals: 6 Games For A Buck Or A Free Game