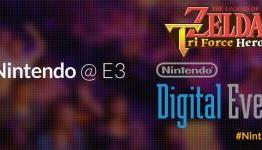 The Positive Side of Nintendo @E3, Tri Force Heroes, Wii U, NX, and More

Zelda Informer: "I’ve been racking my brain since we finished with our Tri Force Heroes and Hyrule Warriors: Legends coverage on the first official day of E3. I won’t sugarcoat it, I wasn’t satisfied with Nintendo’s Digital Event. It lacked any major “oh yeah” moment for Wii U gamers and for 3DS it almost felt like we were getting a bunch of experimental ideas (not a bad thing) in established franchises that we’re still waiting for a major game in (Metroid).

Fan reaction says it all. The trailer for the new Metroid game on 3DS, a multiplayer shooter, is approaching 40,000 dislikes compared to a few thousand likes. There is an absolutely pathetic petition to cancel said game, which is wholly selfish. Beyond that, fans here at Zelda Informer have been rather mixed when it comes to Tri Force Heroes. A majority are okay with it, but there are plenty that are unsure or not feeling it.

Beyond that, many feel Star Fox: Zero didn’t show well in the direct, followed up by some negative reactions from the media on how it controls. Needless to say Nintendo didn’t show well at this years E3. Still, there is a lot of positives to take away from them this year that tell us the future is very, very bright."

The best thing about this is nintendo can now try and correct it's mistakes, release a direct to get the momentum going again. Also it's a great time to get stock from them lol.

I expect things to build again as xenolade and Zelda approach.

10 Times Sega Beat Nintendo At Their Own Game