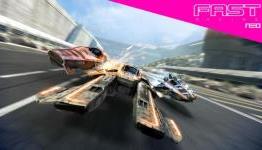 Fast Racing Neo Confirmed For Release On Wii U In 2015

Hopefully, the long wait was not just to improve the visuals, but to scale the game up from its original WiiWare incarnation.

NOW that showcase the power of the Wii U.

Probably the best looking Wii U game base off those screens.

Screens are inside this article too, there is a showcase...

There is the F-zero game people wanted.

Seems like I have been waiting for this game forever. I can't wait to play it.

Had same thoughts after seeing photo .

This will hopefully tide me over until Nintendo finally makes a new F-Zero.

Nintendo should hire this group, and let them work in their own studio like Sora does. They're extremely talented, and could give Nintendo advice on future hardware specs.

Some thing tell me nintendo doesn't need help in advice for their specs only a pr team willing to blow power claims and inflated numbers up gamers butts and just end up beating the competition barely by a few pixel or a frames.

every one knows about it except the console community.
http://wccftech.com/amd-700...

So they are already talking to the people they need to talk to, AMD. Developers, have no idea when apis or chip tech is going to progress.

The GDDr 5 in the PS4 is going to look like a mistake if nintendo does release a super wiiu that scales games and can almost play any pc game while keeping the console stuff intact.

Plus stop talking about spec because all of these systems are weak. The next jump will be special.

You literally schooled my $%*.

You do have a point with sora. Yet im not sure most people could handle being judge while trying to make your vision.

Still wont part the chavs with their much over hyped and under performing 'next gen' machines. This gen has been a travesty in that regard, where a great console with a great library of games gets overlooked because image and PR remain priorities - in a lot of peoples minds.

The fault for the failure of the Wii U lies squarely with Nintendo itself, not the gaming fans they abandoned. When they decided to use the same tired old approach in console design as they did with the disappointing Wii, they sealed the fate of the Wii U.

That old formula, of making the cheapest possible base console, throwing in a questionable gimmick, and expecting huge sales, simply doesn't work anymore. It did work, for a while, with the original Wii, but even that system died many years ago, when the fad fizzled out. People grew bored with the waggle gimmick tied to cheap hardware, and abandoned it in droves. Yet here we are years later, and the PS3 and 360 are still going fairly strong.

If Nintendo wanted a successful console this generation, they should have done a much better job of designing the Wii U. They completely gimped the base console specs and features, to keep their costs down, profits up, and to make up for the high cost of the gamepad gimmick.

The end result? A console that simply can't compete, and is unable to run current generation games. It's fine for Nintendo's own undemanding, cartoony games, and for some indie games, but wholly inadequate for everything else.

If you have to blame someone for the failure of the Wii U, please place the blame where it belongs, squarely with Nintendo. And as the diehard Nintendo fan that you are, you really should demand better products from them in the future, instead of eternally making excuses for their bungled products.

But, boy oh boy does it have some really good games and a crazy attach rate!

How about that Splatoon debut schiller? NiCe :)

So chiller what happens when the NX is a super wiiu? what happen when old wiiu games just scale to 4k and there is no need to make remasters for thE NX and the specs are rADEON r9 WORTHY?

Thankfully sony has shown the way. Put a bunch of specs in there that amount to a 10 fps difference, meet half of the requirement for unreal 4 and the pop core will flock to you?

You know sony did this with their Tvs... do you know what happened? Fanboys wised up. Also samsung and LG moved on to better tech while sony sold over priced every thing.

Really all nintendo has to do is make an enthusiast console. Try out new tech and sell it for the people who can afford PC gaming. Keep the wiiu going and the new 3ds as the cheap alternatives. Make one game for new 3ds, scale it for the wiiu and scale it once more and add DLC for visuals only and let the public decide what nintendo should be doing.

True it all is on nintendo but that isn't a problem also. This is one of many ways nintendo could go to do just fine to stellar.

As a die hard sony fan 4 PS2 and one PS3 strong I demand more of sony. They will have to wake up before the PS4 gets vita'd. If I remember correctly it also had a similar lead on the 3ds for a long time. What is sony excuse for the vita, the PS go, the PS phone, move, eye toy, their PC, line, their tvs, i mean really... sony has a huge grave yard of bungled products.

What the ?? oh its chiller again hating on nintendo

nothing to see here move along

its coming this month

It has that Sega arcade racer looks of it.

Looks INSANE graphically. Above most PS4/Xbox One games.
I hope it plays as good as it looks, but as of now I will definitely be purchasing this game (unless reviews trash the gameplay).

Switch loads games much faster than the Wii U

Switch Launch Line-up Gets Bigger with the Inclusion of FAST RMX, a Remix of FAST Racing NEO

Xbox Series S vs Ray Tracing: The story so far