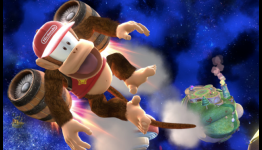 Smash Bros. Player Is So Damn Good, There's Now A Bounty On His Head

Gonzalo “Zero” Barrios is on a hot streak. Since November 2014, he’s come in first for every Super Smash Bros. for Wii U tournament he’s participated in. That makes a whopping 34 consecutive first place wins for the 1v1 category. It’s absurd.

"Mercy is for the weak."

"We do not train to be merciful here."

No mercy in this dojo.

I like a challenge mmm thinking about trying to beat this guy.

Me too, might just as well break his 34 winning streak while im at it.

Me too. I've never played any of the smash series before. What are my chances guys?

Hmmm no but ill give u a hint it sounds like grape that will happen to you :(

Pfft. Give me Lucas/Snake and I'll have his head on a platter.

No mere mortals can stand up to true smash pros. Especially in melee.

I would wipe the floor with anybody on melee.I love smash bro been to a few tournaments back in the day won some good money and prizes

I have placed in some melee tournaments as well, but the top players would make jokes of us. You may find your skills haven't aged well actually, most melee players today are way beyond where they were years ago.

I won a small local tournament when SSB 3DS came out. I wasn't even very good compared to my Melee days. I never had money to do the tournament scene but I think I would have went semi-pro.

Haha the guy in the scarf who plays a cheesy Zero Suit Samus?
Hahahahahaa

That was pre-launch. He mains diddy and has shiek as a sub iirc.

Is there a video of him owning at smash

He was the best project m player I believe, just look him up on youtube. You may be surprised at the competitive scene smash has and what the game is capable of competitively, especially melee.

he was never the best project m player...he owns the smash U scene tho

He prob plays with the most overpowered character, its the only bad thing about fighting games. Theres always going to be that powerful character falling into the wrong hands.

EDIT: just as i thought the guy is a diddy kong player aka the best character in the game .

News flash: Diddy was nerfed HARD in the last patch.
He's no longer the pseudo MK of Smash 4, meaning his skill with Diddy actually has merit in effort, rather than in how broken the fighter itself is.
He's also quite a proficient player with his alts, so he's not just slogging along with cheapness.

Nice, he must be gettin all dem babez

He sure has the "looks" for it. LOL

Meh... I could take him on with Link. lol