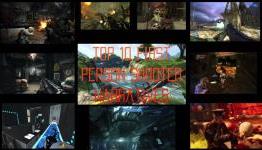 EB: Unfortunately, not all FPS titles feature narratives that are worth writing home about, or manage to further coax you into learning more about the game’s world and characters, because quite frankly, a FPS game can still be highly popular with a crap story thanks to the multiplayer modes they feature. With that being said there are definitely more than a few FPS video games that not only managed to offer kick-ass gameplay, but also contained a narrative that further engrossed you in their worlds and lore. These types of FPS games are often a rare breed, but they do exist, so I decided to rank ten of the best FPS video game narratives to guide you towards a few shooter-centric games that offer more than just endless bullets and canon fodder to place them into.

This a good list. I would have had bioshock take the number two spot and halo 2 be number three.

I'd have to agree with most of the list (would have swapped the two entries into the Halo franchise, but it's cool), but no Half Life 2? Do you just hate cool things? Cool, genre-defining things?

I knew that was coming. I can honestly say I've never played it. Just a matter of timing in life. Was working for the man in 2004, didn't really game on PC, and by the time it dropped in the Orange Box I couldn't get into it for some reason. I know, it's sacrilegious to not have it on this type of list.

Hey man, it's all good. I'm just now getting around to the older Halo games thanks to MCC.

Play the Orange Box. You'll like Half Life 2. Even by today's standards that game is still good.