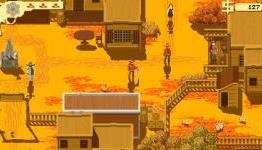 TwoDashStash: "Set near the towns of Clintsville and Santa Anna, the Hero is set out to find the murderer of his mother and brother. You set out to find out any clues to identity of the murderer by asking virtually everyone you come across , save for most of the bandits of course. The towns and surrounding locations feel alive as they bustle with activity. Plenty of people to talk to both to pick up clues, but also to just soak up the culture of the surprisingly detailed world."

How To Change Clothes In Pokemon Scarlet And Violet