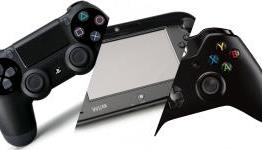 In the white and blue corner, wearing a familiar plumber’s red hat and thanking the Three Goddesses that Smash came around to boost their sales, we have Nintendo‘s Wii U. In the black and blue corner, sporting an obnoxiously-bright color-changing light and handing out free games, we have Sony’s PlayStation 4. And finally, in the black and green corner– despite the fact that these things are usually done with just two populated corners– wearing power armor and desperately trying to distance itself from its crazy ex, the Kinect, we have Microsoft‘s Xbox One.

This article is pretty true,however Sony does have some very strong contenders, as far as 1st party goes. Wii U had a year head start. It will be interesting to see what happens in the next year. Sony is going to have some great stuff, but even so, my top 4 games I want to play are StarFox, Zelda, X, and Eternal Darkness, no it has not been announced by Nintendo, but they have renewed the patent twice in the past couple of years. If they do not use Eternal Darkness by the end of the year, they will lose it. So I have my fingers crossed.

What I find funny, is people bash Wii U, and praise PS4 to no end, yet Wii U has way more exclusive and fantastic line up right now than PS4/XB1 combined(I said EXCLUSIVE). Its sad that so many haters have not even given Wii U a real chance.

Not a Nintendo guy. I like grown up games

There are plenty of games on Wii U that are "grown up".