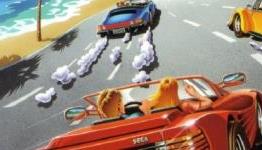 The Sega 3D Classics line has been a complete and utter success for Sega. Not only have they dug into their treasure trove of bygone era gaming goodness, but they’ve opted to showcase some of the pinnacle titles that helped define not only the culture of gaming, but a time in history. While February’s installment in this 3DS series was a fun venture into the colorful world of Fantasy Zone, it felt lackluster when juxtaposed with the titles in the 3D Classics lineup that came before it; historically important titles that helped solidfy Sega’s gaming identity in the 80s and early 90s. Fortunately, this latest entry, OutRun is one of those titles.

Final Fantasy 16 Gets Gorgeous Artwork Showing its Characters Including Cid