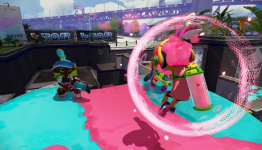 It seems that Nintendo America has kicked off their ad campaign for the upcoming Wii U exclusive third-person shooter, Splatoon.

You know, I've noticed something about Splatoon's premise that I don't think a lot of people have commented upon, so I wanna toss this thought of mine out on this site and see what others think...

Am I the only one that thinks the whole premise of Splatoon's victory conditions, is a lot like a ramped-up version of Domination matches in Call of Duty, and that it might appeal to the more open-minded CoD players because of that?

I know a lot of people might be knee-jerk-reactioning with a "no" right now, but hear me out for a minute...

Domination, in CoD, is all about taking control of three areas in the stage, and holding the most of those areas down for your team the longest will result in your team getting to the winning number of points sooner.

Kills don't matter as much towards winning; taking out your opponent is just a means of preventing them from taking over the areas and gaining points, and earning killstreaks to help defend the goal areas better.

Splatoon works on an expanded version of that same premise.

Instead of just three small spots that must be defended, the entire stage is your "Domination area", and instead of getting to a point limit sooner [though that might be a separate game mode, we don't know yet], the way to win is to just have the most points via stage covered by the end of the time limit.

Heck, even though the concept isn't as big, the game also supports "killstreaks", in a way.
Besides main weapons and Tactical gears [grenades, paint shields, etc], there's weapons that work on a "charge", that are extremely powerful.
One of them is a wide-area paint nuke that falls from the sky after you launch it, and it doesn't look like it's something that is quickly charged.
As far as I know, it hasn't been explained how these weapons are charged, so it's as fair a guess as any to think that these weapons will work based on how many times you take out members of the opposite team.

Same as killstreaks, which become available depending on how many kills you score back-to-back. [Though Support lets you carry over kills between deaths; not sure if Splatoon will do the same with its charge weapons]

So, what do you think, guys and gals?
Are the parallels I've drawn good ones?
Do you think CoD players who see the same parallels I'm drawing, here, might give the game a play based on the similarities to something they're so familiar with? [Assuming they like Domination matches, of course]

@Wonderful: I would say that's a fair assumption to make. I always thought of the game much like Domination.

I think the idea of the entire game is pretty awesome. My nine year old daughter or wife and I can sit down and play this together and all of us can have a blast playing. Its an easy pick up and play shooter that anyone can just jump in and start having a good time.

That's one of the many reasons I love Nintendo. Nintendo doesn't just try to cater to the hardcore gamer. They also think about others who might not be so good at these types of games. Whether it be a shooter, platformer, racing, fighting, or even exercising. Nintendo just makes it easy on everyone to have a good time playing whatever it is they are playing.

As for Nintendo's new AD Campaign. I think it makes perfect sense for this tittle. Every time I look at the case the colors are popping off the box.

The case makes me happy every time I look at it. For some reason it reminds me of 90's Nickelodeon. Was my favorite channel to watch as a kid growing up lol.

Playing a shooter with the family!?

the devs itself full of harcore fps fans..cod..bf4..

I love Nintendo for this sort of outside thinking. In the end though you are right. It is Domination on steroids with Nintendo supplying the color we have come to love. This will be a day one as was MK8, SSB, Hyrule Warriors and in the future, Xeno X, Yoshi, LOZ, Star Fox, and Devils Third as well.

Good observation though Monkey man. It is very similar and given the right oportunity it could be around a long time as has the COD franchise.

I could definitely see this becoming a big time competitive esport. The potential for CoD level Splatoon tournaments is definitely there.

well.. it should'n been issues..its common for devs to inspired from another game and reuse same mechanics that might be usefull...ofcourse everyone want to have original things..but it shouldn' issues...not as it was trademark or something

My understanding of the superweapon mechanic is that it is charged as you fire paint and, should you ever get splatted (killed), you lose that charge. Obviously, for balancing reasons, it is going to take a while to get that superweapon if all you're doing is painting the map. But it seems like that is what it's drawn from.

Also, we have to say, that in todays market, coming up with a whole brand new idea for fps modes its really not easy, I mean, one way or another the best ideas have been used for the last 20 years, so coming with an idea for a mode thats 100% inovative, and at the same time really fun, its something really really tricky to do, so its nothing surprising that they went and took inspiration from other games to make their own game better.

9 Most Interesting Third-Person Shooters Made by Japanese Developers