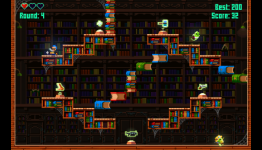 PSLS writes: The organizers of GDC 2015 did a great job this year of highlighting indie developers and letting them show off their wares to the world in a couple of places. Whether it was at GDC Play or at the Indie MegaBooth, indie devs were a plenty and their games were pretty darn good. We got a sneak peak and hands-on with indie developer Golden Ruby Games’ Extreme Exorcism and it continued the awesome indie trend.

I'm getting a bit overloaded with 2D games lately