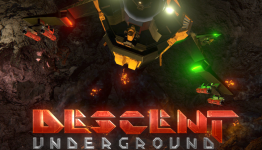 Marcus Estrada writes: "It was back in 1994 that Descent first graced computers. The 3D flight-based shooter was an immediate hit, spawning two sequels which each improved upon the adrenaline-pumping gameplay. Unfortunately, the era of PC gaming dominance was about to get overrun by consoles... The series was quietly ended and folks did their best to find new frenetic space games to scratch that Descent itch. With the rise of both indie games and Kickstarter PCs have become a massive target audience once again - and now Descent is back in the form of Descent: Underground. And yes, this campaign is by folks who own the name so it's a completely legal endeavor by developer Descendent Studios."

Descent: Underground gets a free demo for a limited time