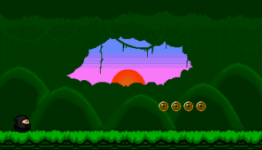 Starfall Studios have released another update for their project Sneaky Ninja today as well as confirming that they have entered the final 48 hours of the campaign! The new update rakes a look at concept art for an 8-bit themed bonus level which is currently a stretch goal. As with previous updates, the studio have expressed intent to include these regardless of if they make it to the goal.

Sneaky Ninja Still On Track For Wii U, And Possibly Switch, Release

Sneaky Ninja is Stealth At Its Most Adorable | Hardcore Gamer