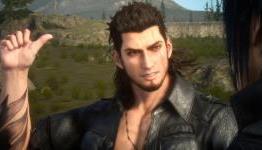 Final Fantasy XV is coming for your life, and it’s going to steal it with reckless abandon.

If its anywhere as good as it needs to be, I agree take it!

I doubt FFXV will have framerate issues or bugs. Usually those games are impressively polished and i am pretty sure Square Enix biggest game in the history will be their most polished game.

I cant wait to get my hands on it.

considering its been in development for close to 9 years and was ported over from PS3.....I'm doubtful it will have much issues.

The game started from ground up on the new consoles in 2012.

The PS3 version was scrapped it was built all over again from the ground up in 2012.

its not even close to be called 'port' of...

the game had been build on high end pc all these times...

Well I'm going to get sucked into the hype yet. I'll play it with an open mind.

Even with the demo I'll wait for the final product. I mean who knows maybe they are picking the best section for the demo to give you a better impression. It happens.

I told myself when it was still Versus that if it ever came out, especially after what happened with FF13, to go into it with an open mind. Journalists and Square Enix themselves hyped the shit out of FF13 and yet it was pretty bad. I'm more on the fence now with all the content I've seen removed after Nomura left.

I wish more people had this mindset.

I know because the same people who are saying stuff like "OMG THIS LOOKS AMAZING" or "FF IS BACK ON FORM" are people who were sucked into the hype with FF13 and were very disappointed.

I get it though, people want a good FF game. I do aswell but I can't give Square Enix credit for something they haven't done.

I'll admit it looks better then FF13, hell I'm going to say it will be. But will it be FF on top form again? Who knows.

I just keep looking at what there and thinking it looks decent but then I see all the stuff they changed or removed when arrogant Tabata took over and it's kind of turned me off a little.

We'll see though, the demo will probably be impressive but I'm not going to be lured in that easily. It's easy to take the best part of a game, or one of them, and make it into a demo.

I just hope people will be fully honest in the end, especially journalists. The marks they gave FF13 were outrages.

Kind of disappointed there isn't any Collectors Edition yet.

" I'm more on the fence now with all the content I've seen removed after Nomura left."

The concept of the game is still the same. The new director hasn't actually changed much considering the bulk of the game was already complete when Nomura left.

The new director is likely just over seeing it completed, this game was being worked on for over 9 years and last I recall, its concept has not changed.

I haven't seen anything that suggest thats changed some how as I doubt it has.

"Character Switching is gone, you only play Noctis now.

Blood seems to be gone, instead there is an oil like substance.

The ability to equip all weapon types is gone, or at least vastly changed so it is not the same (guns and such are out).

Manual in combat weapon changing seems to have been replaced with decks.

Character switching Combos are gone(You can combo your attacks across character changes — that is, you can keep your combo going when you switch the character you’re currently controlling.)

Hitting enemies with your car seems to be gone.

In Final Fantasy Versus, it is possible to ride on monsters and aim at specific parts of their bodies.

Magitek armor, which “you can actually control and ride.”

Air Ships may appear. That is up in the air.

Other Party members; Before, it had been said that the group would be larger than the 4(though guest are confirmed)

Cell Phone Pics, Noctis was going to have the ability to take pictures with his cellphone."

The blood ll be added as a DLC or an option to trick the Pegi rating.

The combat is no longer like KH since E3 2013,dont listen to the fake HDU.

The ability to equip all weapon was something like now , Normura said the E3 trailler had automated weapon switch but he would try to make it manual.

The abitlity to equip all weapon types is not gone , except for the guns , but did you ever see Noctis whit a gun ?

And the E3 trailler showed things like a lance-gun etc .. so you maybe have gun-blades and hybrid gun weapons in the end.

Again there has never been any manual weapon changing since E3.

You can still have more than 4 menbers in your party.

They talked about hiting your enemies whit your car near TGS 2014 ,it has a lot of chance to still be here and i would call it an important vision.

Except the cell phone and the swiching i dont see any more things removed .

I say removed but they surly werent operational in the ps4 version anyway or he would have kept them for sure , it is more like he didnt make them true.

PS: It took Tabata only 4 days to resovle the hit-stun problem a lot of people complained 2 weeks ago , i wouldnt call him arogant so (this problem was not even legitim i think ,since it was asked from people watching a youtube lagy video and who didnt play it).

The only thing I was really disappointed about was no character switching but I got over it. Still I'd love if I were able to play as Prompto with his acrobatics lol

I do wish Nomura stayed in charge but the thing I do like about Tabata is that he's ready to listen to complains and change things, I believe that's what the demo is mainly for. To deliver a FF with stuff fans actually want to see in it.

The sad thing about hype is that the said game will (almost) never live up to its hype.

I'm not really sure what Tabata has changed. f I'm unaware, it means that it didn't bother me. As long as the story remains the same.
I don't think that they changed it, I just think/hope that they showed us some light hearted footage in preparation for the demo.

The only thing that I dislike so far is that we can't change pary members anymore. That was a huge bummer. I do prefer the new clothing they gave the guys.

What have they changed or removed? I haven't really been following the game too closely until now so I'm just wondering.

Only thing removed is the character switching. Also the combat is now like a fusion of type 0, Kingdom Hearts, and maybe a little of Dragon's Dogma, compared to Versus 13 which was extremely similar to Kingdom Hearts battle system. Some people are misinformed that there was manual weapon switching in Versus 13 but Nomura stated in interviews that weapons switched automatically (like now, with a weapon deck). Warping is still in. Phantom Swords still in. Climbing big enemies still in. Tabata wasn't lying when he said that character switching is really the only big thing they took out.

Half of the things that article of things removed you posted a link of, were things that they were unsure if they were not in the game anymore, things not confirmed yet is not the same as being removed

The game looks fine and all, but how I hate the character designs... I hope there's some way to change their clothes...

Noctis clothes looks really cool. The others are not so bad too,

They said recently that it may be possible to have outfits (but it is not a developpement problem).
So let's wait and see .

That would be cool! I mean "based on reality" my ***, they're fighting a freaking 20 foot tall behemoth... certainly clothes could have some fantasy too! :)

Yeah, for being your main characters they all look the same

Noctis looks cool but his back up dancers....I don't know. I would of preferred Noctis having one best friend joining him and he finds more people on the way, the traditional FF path.

Or just more variety. They're all human, japan-emo-looking guys.

A simple red jacket on one, a lumber shirt on the other and voilà, not a j-rock band anymore! lol

They should take a hint from persona character design. All teenagers from the same school, with the same uniform, but a whole lot of personality in the details!

Their personalities are suppose to be quite different... just saying

Noctis is nothing like squall and cloud and for that matter cloud and squall were nothing alike either.

Well, Prompto is clearly the Yuffie/Selphie/Rikku/Vanille of the bunch,

But I must say I'm biaised against it.

I've played final fantasy since the first one, and this is in no way a return to form. It's actually the less Final Fantasy a Final Fantasy game has ever been, along with VIII...

lot of people from gaming website who tried the game for hours had that kind of impression first..then after actually hold the controller and play...no it was great..have faith in nomura and square

Like it didnt do it long time ago , sad story ....
I ll get my revenge on the demo and the final game.

It is, along with it's posse Persona 5, Xenoblade, Zelda, Bloodborne, MGSV, and FF Type-0.

My life is already going to be consumed by bloodborne, now this demo. MY gosh. well good thing I alienated myself from my real life friends lol.

It's coming to crush my hopes, certainly.

Nonsense. Judging from your previous comments on this site, you didn't have any hope to begin with.

This is the game I look forward to playing the most alongside mgs.

The hype train is departing the station soon, but doubt the ride will be worth it...

I'm off that entire week from work..I'll be consumed half the day with the demo,the rest of the week...Type-0 hd & other PS4 & 3 games! Possibly next year around this time FF-XV will be released & it will steal away a lot of my time.

I really hope it actually gets pushed to next year, seeing as Xenoblade is looking more and more likely to finally be released this year. Just need actual confirmation. I don't have enough time in my day to juggle work, school, gaming, and everything else in life and still find time to play two massive JRPGs, especially ones with combat systems as complex and strategic as FFXV and XCX. This article really helped to alleviate some of the fears I had about FFXV, now to wait for XCX to release so I can give it my life before my life is consumed again by FFXV. This is THE year of the RPG!!