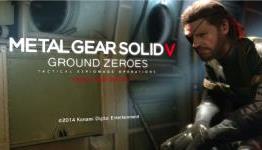 New DLC content for Hideo Kojima’s Metal Gear Solid V: Ground Zeroes would be “Impossible” at this moment in time, according to Kojima Productions’ Kenichiro Imaizumi.

There would be no point, considering Phantom Pain is coming out fairly soon.

That's what the man said, and I would totally agree with Kenichiro Imaizumi!

I'd rather see them put their time and resources into The Phantom Pain's development, of course.

But it's DLC which can played separate if you want. You'll basically get a lot more stuff if you have played MGSV

Just bring us TPP after polishing it :), no need for extra GZ DLC. I can wait.

yeah but still... one new mission a month by a sub division of kojipro would be nice

Just put MGSV GZ on PS+ and Games with Gold for 0 and that goodwill will do more for hype than DLC could ever hope to do.

Games of the Decade: Metal Gear Solid 5: Ground Zeroes and the art of restraint