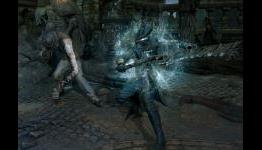 At Game Developers Conference (GDC) 2015, there was only one game whose booth consistently had a line of eager fans waiting to play the demo. That game was Bloodborne, a PlayStation 4 exclusive made by Japanese studio From Software, developers of the cult-hit-turned-AAA-franchise Dark Souls.

Bloodborne has been recreated in Minecraft, and it's mind-blowing

A Bloodborne Remaster Just Makes Too Much Sense After Elden Ring