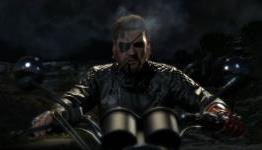 Hideo Kojima, in a recent interview with IGN, stated that there wouldn't be much dialogue from Snake in the upcoming Metal Gear Solid V: The Phantom Pain. Should Metal Gear Solid's Snake keep quiet? One writer thinks that muzzling Snake takes away what made him iconic in the first place.

"Kojima is a visionary video game director, but he’s wrong here. No matter how I try to interpret his words, I can’t help but feel like he simply doesn’t understand Snake. "

This here is not Snake. This here is the Big Boss that is driven by Revenge. So you cant expect him to happy and talkative like he was before. Big Boss is man ascending to madness and hell so its hard for him to be cheery.

I cant help but feel that this article is useless and the author doesn't understand what Big Boss is really going through here.

Also how's this guy think he knows the metal gear universe more than the person who created it? Baffling.

That and I believe the part of his brain that's damaged by the shrapnel has something to do with his change in behavior and not talking much.

His not being so talkative means something in this game, though. We're supposed to infer that he's keeping his hatred inside, turning introvert, decaying inside. That's a depressive state and his only reason to go on is to take his revenge, which is the main theme of the game and also clearly stated in the trailers (not for ideology, not for honor, all for revenge). Revenge is a dangerous motive and it'll take its toll on Big Boss. What is there to live for after he takes his revenge? It'll probably take away a big portion of his humane side, leaving him aimless, and with all his power at the end he'll be the most dangerous man on earth. Victory will not satisfy him after all the things he has gone through and that's the kind of person who might easily yield for his darker side. He'll be a changed man rising from the ashes and yet he'll be the fire itself at the end.

Some might disagree with me here. But I look forward to see more silent Big Boss :D. Don't get me wrong, I love all the codec calls and how much Snake talked in previous games. I think people might be misunderstanding Kojima-san.

Because I'm sure Big Boss will get to talk a lot in TPP cutscenes, but it will feel like he don't talk much at all compared to Kaz or Ocelot. Why? Because he ain't going to talk all the time over the codec while exploring the open world zones etc. I don't think Kojima would just use Kiefer as a silent dude, no way.

Also imo Big Boss being silent makes sense. Here's why: He's being through some serious crap since GZ, losing his MB and close brothers, going into long coma, hunted down when waking up, losing one arm, getting a huge freakin shrapnel stuck into his head that turn him into a demon, wounds all over his face and other eye, finding out Kaz's condition etc.

This can change a person so he ain't in a happy, talkative mood in TPP. He is turning into the madman from MG1, so expect to see less jokes. Well this is what I think :). I believe Kojima knows his saga & characters better than anyone, and he is trying something new here which will result in a masterpiece. Maybe less words for BB, but the beautiful Facial Motion Capture tech makes up for it, just watch GDC trailer chopper scene for example and you know what I mean. (sry for long post lol )

I cant wait to hear Ocelot talk all day. I still hope he is in the buddy system.

I can't wait either :), luv him and Kaz. Also to add in my post, TPP will be pretty damn long for sure. So this is why I think we get to hear Big Boss talk much, just not previous MGS much because no usual codec.
Perhaps we get more cassette tapes etc, I dunno.

I agree with this article. As soon as I heard it announced that Metal Gear was going open world, I started fearing for the game. Then changing Snake's voice actor?... The fear started to grow. Then Hideo saying that Snake wouldn't talk much, and that Snake has always just been an extension of the player?.... I'm full on worried. Dark pointed out that it is Big Boss that we will be playing. Driven by revenge. Even so, Big Boss has always been a talker, even when we meet him as Solid.

I still can't wait to get my hands on the game, I just fear that it's moved in such a different direction that it will lose some of what caused me to fall in love with the series in the first place.

On the other hand, I Kojima... Ultimately, this is his story... These are his characters. I should have faith that he will, once again deliverer one of my favorite experiences in gaming. Jumping back to that first hand for a second.... I trusted Lucas to make awesome Star Wars prequels. I still have a sore spot about that. Jar Jar freakin Binks!

Nobody can replace David hayter.... and kojima you did a mistake for letting biggy boss dont talk so much..

David Hayter isn't nearly as good of an actor as Kiefer is and this is coming from a huge Hayter and MGS fan. Kiefer will be doing much more facial and body acting along with his voice acting and Kojima says he wants to convey more emotion through Kiefers visual expressions. I don't know why people can't understand this. People also want to keep bringing up that the Japanese version will have the original voice actor therefor they think Hayter should have still played Big Boss but they aren't thinking about the fact that Kiefer is doing all the motion capture.

Did you know?.... David Hayter is also a writer, a director, and an actor. He could easily have done the facial and motion capture for Snake. Take a look at IMDB.

@The_Sage: I know that he is an actor but really isn't that great of one. He is a better writer. Kiefer is a much better actor and could do far better than Hayter at motion capture and voice acting.

But Hayter perhaps couldn't have done the Facial Motion Capture right way, because the Snake voice he use is not natural so I wonder if it would've bothered with the correct Face motions.

Not sure how David do it in studio :).

Point plank period Big Boss and Solid Snake should have never been played by the same voice actor. Big mistake in the franchise.

I noticed Snake wasn't going to talk much based on the trailers and ground zeros. I asked myself why isn't snake talking as much as he use to? This has me a bit worried.... I'm hoping its like others say about Snake not talking as much during the open world segments. Im still not sold on the whole Kiefer change.

Shut the fuck up, Hideo knows Snake as much as ur right hard knows about ur pecker.