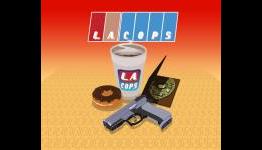 Who doesn’t love 70’s cops? From Kojak, to The Sweeney and even good old Gene Hunt in Life On Mars, fictional cops of that era had it all going on. Fast cars, big mustaches and a no-nonsense attitude to getting the job done. Modern Dream, the makers of The Typing of The Dead, have attempted to bottle that 70’s cop vibe, adding to it a sizable glug of Hotline Miami-esque gameplay, and given everything a good old Early Access shake, LA Cops which hits full release on PC and Xbox One this week is the result.

Adhttps://store.steampowered.com/app/1488200/Symphony_of_War_The_Nephilim_Saga/?utm_source=n4g&utm_medium=native&utm_campaign=sow_n4g_native&utm_content=png
- Comments (0)+ Comments (0)
TopNewestOldest
The story is too old to be commented.
90°

The Team17 Indie Collection arrives on Xbox One, but it comes with a ton of content

Which of this week’s Xbox Live Deals With Gold bargains should you pick up? – 21st June 2016

Law And Order Bundle Is Now Available For Xbox One