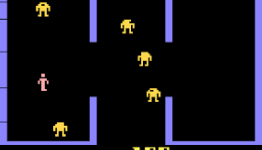 Every day, lives are lost while playing video games; virtual lives, though, not real ones. Just look at Dark Souls – that death counter’s still rising and’ll probably rise even more when the Playstation 4 version’s released. Rarely, however, are real lives lost. In 1980, that wasn’t the case. Legend has it that a stand up arcade game, Berzerk, took two lives. Those two lives were the players that hit the high score on the game. Sadly, they didn’t gain accolades like the high scores in Donkey Kong and the like. Instead, they earned a cremation or a burial, all for enjoying a harmless game.

Adhttps://store.steampowered.com/app/1488200/Symphony_of_War_The_Nephilim_Saga/?utm_source=n4g&utm_medium=native&utm_campaign=sow_n4g_native&utm_content=png
- Comments (0)+ Comments (0)
TopNewestOldest
The story is too old to be commented.
570°Hot71

The Best Video Game Remakes of All Time