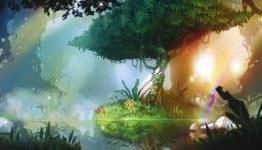 Edge Staff:
More than a decade after its sale to Microsoft, little tangible evidence now remains of the ’90s golden age of Twycross veteran Rare. With most of its IP shelved in favour of Kinect games, the former creator of charismatic shooters and platformers is almost unrecognisable from the days when GoldenEye 007 ruled the multiplayer scene.

One ensemble of Rare old guard has pledged to reclaim what was lost in that $375 million acquisition. The six full-time employees of Derby-based startup Playtonic spent a combined 120 years at the studio, and now boast ambitions to create the type of games they might have made had the keys not been handed over to Marc Whitten in 2002.

Adhttps://store.steampowered.com/app/1488200/Symphony_of_War_The_Nephilim_Saga/?utm_source=n4g&utm_medium=native&utm_campaign=sow_n4g_native&utm_content=png
- Comments (0)+ Comments (0)
TopNewestOldest
The story is too old to be commented.
140°13

Playtonic would ‘love to make a new Banjo-Kazooie'

Playtonic: "We are never using the term spiritual successor again"

The wait was worth it for Yooka-Laylee on Switch