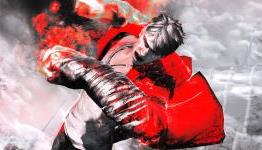 Ken McKown writes: DmC is one of the best action games of last generation. There I said it, and I feel good about it. I think Ninja Theory brought the series into a new light with a coherent story, fantastic set pieces and amazing combat. Toss aside all the drama surrounding the title, and I feel it is some of the best stuff Capcom has put out in the genre in a long time.

Would rather play Bayonetta 2. If I am going to play a protagonist with short hair and clothes that tight, it is going to be a sexy ass woman and not an emo looking kid.

I'd be judging that the reason why you only have two bubs is some kind of indication why there are SO many things wrong with this comment.

No it is because i am on N4G and, despite owning a PS4, do not follow nor support blind fanboy elitism that PS4 owners have on this website. Besides, i am perfectly fine having only 2 stars if it means I prefer beautiful women to tight clothes wearing men. To each his own and Bayonetta is what I want rather than this. I will gladly deal with 2 bubs to keep my principles the way others do in their own lives.

I see, I've made Bias and unbias comments on subject matter but I have no complex. It be nice not to glorify your two bubbles with articulate comments seemingly unbias whilst still attacking a certain demographic of what you see as "fanboyism" can easily land you less bubs. Doubt this is for being a good commenter fighting the good fight on "N4G community needs to understand the great attribute that I recognize in Ninty". I'm not attacking you but I don't like when I feel like someone is bashing something while being subliminally being bias on what console it's on. and based on your comments Ninty is the way to go for you. If your going to hate do it with hate it doesn't have to be dishonest. Mayamoto wouldn't like that.

BTW I loved the game I had my gripes with Bayonetta 1 AND 2 I just don't play my games based on my interest in sexism or gender, I find neither attractive digitally or realisticly but again to each his own.
Oh and if you didn't know Bayonetta's entire outfit is her hair so she neither realy has "Short hair" or "clothes that tight" for a technicality.

The media seems to rate every crap game with good scores and some good ones with bad scores. Is it for clicks or what? It's not just the look, combat is worst, bosses are worst, weapons are worse, story is again in fact worst even though the previous entries didn't focus on it. Dmc4 specifically had a better story with a pope trying to become God by absorbing a vast amount of demons. It's not just the look, it's everything about the game is worst than even its ps2 counterparts